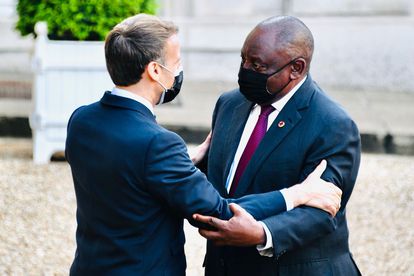 Cyril Ramaphosa hasn’t taken many questions from the media at home recently, but he is singing like a canary overseas. Fresh from stating that tougher lockdown restrictions could return during the third wave of COVID-19 in South Africa, the president was then pressed on the Israel-Palestine conflict – and nailed his colours to the mast.

While speaking with France24, Ramaphosa compared Israel to an ‘apartheid state’. Of course, these are terms that are flatly rejected by the Israeli government, but the ANC leader explained why he decided to ‘drop the A-bomb’:

“The way they have been bombing the area belonging to Palestinians, and the way they have unleashed terror, one could easily class it as being an apartheid-type state. This situation is a tinderbox and those who live under oppression feel like they have the right to defend themselves – meaning at one point, they have to be offensive.” | Cyril Ramaphosa

Ramaphosa further hammered home his support for the people of Palestine, by supporting their right to self-determination. He has reiterated the official DIRCO line, which is for both sides to put drop their respective weapons and sit down for negotiations:

“We as South Africans are most concerned. People are being driven out of their homes… Israeli soldiers have been manhandling people. It brings back terrible memories of our own history under apartheid, when our citizens were forced out of homes they’d occupied for generations. This is very close to our hearts.”

“We support Palestine, that is based on principle. They want their own state, they want to be able to run their own affairs and have freedom. The violence that has erupted in Gaza… we think the only way to deal with that is for both parties to negotiate. Although it seems like there is no solution, the whole world thought the same of SA under apartheid.”

Ramaphosa in France, with Macron set for SA

The president’s trip to France paved the way for a State Visit that President Macron will undertake to South Africa at the end of May: In anticipation of the State visit, Macron expressed interest to establish a partnership with South African vaccine-producing institutions, to enhance manufacturing capacity.

The situation in Gaza is most worrying. As South Africans we are concerned because what we have seen brings back terrible memories of our own history under apartheid. We side with the Palestinians & our support is based on principle of protecting the right to self-determination. pic.twitter.com/Ygk9M61W1B