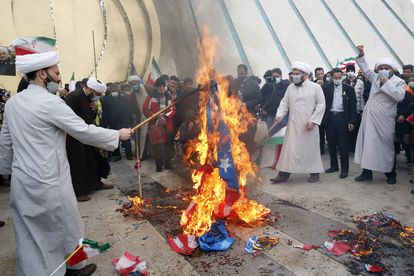 Due to the pandemic, state television said this year, as the previous year, there should be “no gathering or marching” by those celebrating the 1979 overthrow of the shah’s regime.

Instead, people travelled by car, motorcycle and bicycle, to converge on the capital’s iconic Azadi Square, despite chilly temperatures.

Some had painted their cars in the red, white and green colours of the Iranian flag, while others chanted slogans of “Death to America” and “We will resist until the end” from windows as they drove by.

“WE WILL NOT SURRENDER”

A number of US flags were also burnt by people chanting “We will not surrender” at Azadi Square, an AFP photographer said.

Demonstrators bore portraits of Iran’s supreme leader Ayatollah Ali Khamenei as well as the late Ayatollah Ruhollah Khomeini, founder of the Islamic republic, and revered general Qasem Soleimani, killed by a US air strike at Baghdad airport in January 2020.

The celebrations mark the day that Shiite cleric Khomeini returned from exile and ousted the last government of the US-backed shah.

Shah Mohammad Reza Pahlavi had already fled Iran after months of protests against his rule.

The coronavirus has infected over 6.7 million people in Iran and killed more than 133,000, according to official figures.

Iran, which has a population of around 85 million, is the Middle East country hardest hit by the pandemic.

Alongside the pandemic, Iran’s economy has been battered by sanctions reimposed by the United States since 2018, when then president Donald Trump unilaterally withdrew from a landmark nuclear deal.

Iran is currently engaged in negotiations with Britain, China, France, Germany and Russia directly and with the United States indirectly to revive the deal formally called the Joint Comprehensive Plan of Action, or JCPOA.