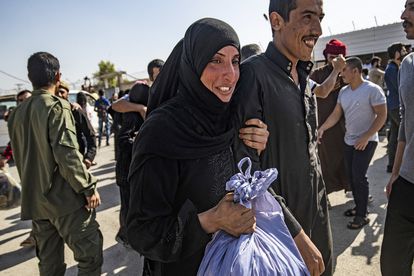 TOPSHOT – A man, suspected of having collaborated with the Islamic State (IS) group, is greetd by a family member upon his release from the Kurdish-run Alaya prison in the northeastern Syrian city of Qamishli, on 15 October 2020. – The Syrian Democratic Forces (SDF) today released more than 600 Syrian prisoners in northern Syria who were being held there for acts of “terrorism” and alleged links with the Islamic State (IS) group. Photo :Delil SOULEIMAN / AFP

TOPSHOT – A man, suspected of having collaborated with the Islamic State (IS) group, is greetd by a family member upon his release from the Kurdish-run Alaya prison in the northeastern Syrian city of Qamishli, on 15 October 2020. – The Syrian Democratic Forces (SDF) today released more than 600 Syrian prisoners in northern Syria who were being held there for acts of “terrorism” and alleged links with the Islamic State (IS) group. Photo :Delil SOULEIMAN / AFP

Neither his family nor his lawyer were given prior warning, they added.

Iran’s official IRNA news agency confirmed the execution in a report, describing Ghorbani as a “terrorist” and member of the outlawed Democratic Party of Iranian Kurdistan, an armed group seeking self-determination for Iran’s Kurdish minority.

UN human rights experts had in September urged Iran to repeal his death sentence over “serious concerns” that he did not receive a fair trial and was tortured during pre-trial detention.

Amnesty International had also called for his life to be spared, saying there had been “numerous violations” in his “grossly unfair” trial.

Campaign groups say Ghorbani was convicted and sentenced to death in 2020 in connection with the killing in 2016 of three men linked to the pro-government Basij militia. He had been jailed since October 2016.

He was convicted of providing transport and logistical support for the killings. But the court verdict acknowledged he had never been armed.

“The case of Heidar Ghorbani was so marred with flaws and lack of any credible evidence that the horror of his execution is heightened even further,” Amnesty’s Iran researcher Raha Bahreini told AFP.

Ghorbani had been executed “in secret” and denied any farewell between him and his family, she said.

“This consolidates an alarming pattern of the Iranian authorities carrying out executions in secret or at short notice to minimise the chances of public and private interventions to save people’s lives,” she added.

Videos posted on social media showed crowds gathering on Sunday for a memorial ceremony for Ghorbani in his home town of Kamyaran in western Iran, chanting “martyrs don’t die”.

Another widely-shared video purportedly showing his family reacting after receiving the sudden news of his execution showed scenes of uncontrolled grief.

“Heidar Ghorbani was subjected to torture and sentenced to death without due process and any evidence against him,” said Iran Human Rights director Mahmood Amiry-Moghaddam.

“Heidar’s death penalty is unlawful even under the Islamic Republic’s own laws.”

The group said his case was still under consideration at the Supreme Court and his relatives were merely pointed towards his grave after it was carried out, it said.

Amnesty International had also previously raised concerns about Ghorbani’s appearance after his arrest in a so-called documentary broadcast in 2017 by Iran’s state-run English language channel Press-TV about the killings.

Activists have repeatedly complained over Iranian state media’s continued practice of broadcasting “confessions” from convicts under the guise of interviews, assuming that they were obtained through torture.

They also fear that disproportionately large numbers of members of Iran’s non-Persian ethnic minorities are being executed, particularly Kurds and Arabs in the west and Baluch in the east who largely belong to the Sunni strain of Islam rather than the Shiism dominant in the country.

“The Iranian authorities have a long-standing history of secretly executing members of ethnic minority groups and burying them in unmarked graves,” said Bahreini.

Iran executes more people each year than any other nation except China. Amnesty says at least 246 people were executed in Iran in 2020 but activists believe the number has increased this year, coinciding with the accession of ultra-conservative Ebrahim Raisi to the presidency.

Also read: UK and Belgium pledge to step up efforts on migrants