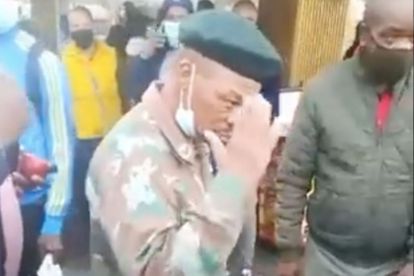 The intoxicated South African National Defence Force (SANDF) soldier, dressed in full SANDF camouflage gear, who was captured on a video that went viral was found guilty of the charges against him.

SANDF spokesperson Brigadier General Mafi Mgobozi said the military police arrested the soldier on Friday, 21 August 2021 in Thaba Tshwane and was kept in custody at the Military Detention Barracks pending his court appearance in a court of a military judge.

“Corporal P.N. Ngcobo, a Reserve Force member, appeared in a court of a military judge on Tuesday, 24 August 2021 and was charged under the Military Disciplinary Code (MDC), section 45(a.)…Unseemly Conduct and was found guilty on the charge preferred against him.

“He was sentenced to a reduction in rank (one rank lower) from a Corporal (Cpl) to a Lance Corporal (L Cpl).”

Mgobozi said the Chief of the SANDF, General Rudzani Maphwanya, and members of the Military Command reiterate and remind all members of the SANDF that no act of ill-discipline or criminality will be tolerated or go unpunished in the military regardless of rank or position.

“Members of the SANDF are expected to conduct themselves with the necessary decorum and discipline at all times.”