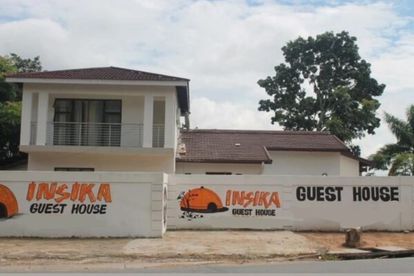 At around 22:00 on Thursday, 9 June, the Insika Guest House was allegedly petrol-bombed. It’s been reported that the guest house belongs to one of the three men arrested in connection with the kidnapping and murder of Hillary Gardee.

The Insika Guest House is owned by Philemon Lukhele

Philemon Lukhele is the owner of Insika Guest House. The alleged petrol bombing occurred a few hours after the court appearance of the three men where the case was postponed for further investigations.

The guest house used to be used as accommodation for students from the University of Mpumalanga. It is believed that Gardee was kept captive at the guest house before being murdered there.

University of Mpumalanga cancelled the contract for student accommodation

Last month the University of Mpumalanga released a statement revealing that its contract with the Insika Guest House owner had been cancelled due to the allegations levelled against him.

Paul Maminza, the Dean of Students, said the university had accredited three Insika facilities for student accommodation. Maminza said the students were informed about the termination of the contract and told they would need to relocate to other accredited accommodation.

The South African Police Service (SAPS) raided the guest house a day before Gardee’s funeral. The police said it was a place of interest.

A family member revealed the details behind the guest house fire

Neighbours allegedly told the family member that a car was seen parked outside the property and that occupants jumped over the wall to access the petrol.

“I rushed to the property and when we arrived we found it was on fire. We started to extinguish it while waiting for the fire department. We found petrol poured all over the house and found several petrol bottles. They said shortly afterwards they saw the fire and the occupants jumped back over the wall and sped off in the car,”

the family member told the publication.

Spokesperson for the SAPS in Mpumalanga Brigadier Selvy Mohlala said the fire damaged a sofa, table and part of the kitchen unit. Mohlala said investigations into the cause of the fire are ongoing and no arrests have been made yet.