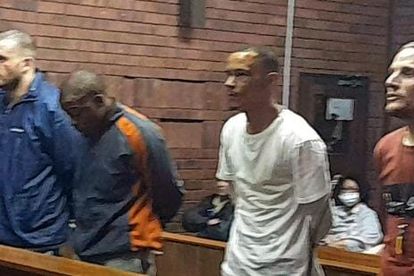 The four convicted inmates who allegedly ran an extortion scam from behind bars appeared in the Pretoria Magistrate’s Court on Monday, 15 August, on charges including extortion and impersonating a police officer.

“The case was postponed to 22 September 2022 for further investigation,” said Nkwalase.

“The operation was aimed at conducting a cybercrime search and seizure as well as executing warrant of arrests (J50) to four convicted inmates on an assortment of charges that include extortion, impersonation of a police officer, money laundering, forgery and uttering,” said the Hawks.

The Hawks started the probe by investigating corrupt police officers who allegedly extorted several men who had sought the services of a “clandestine” online escort agency.

The men would later be told – by the so-called police officers – that cases of rape and fraud had been opened against them. “They would also present a fake warrant of arrest through WhatsApp and demand payment to ensure that the police along with the prosecutor make the cases disappear.”

The Hawks discovered that the four accused inmates used smartphones to create fake profiles of police officers by using their real names and stealing their photographs from social media. The real police officers were completely unaware.

The inmates got hold of the victims’ contact information from a call log from the online escort agency.

During the prison raid on Thursday, the Hawks found a total of 36 cellphones, 19 chargers and other accessories. More arrests are expected.

Members of the public who have fallen victim to the inmates are encouraged to contact the investigating officer, Detective-Captain Jacques Loock at 082-778-5626.