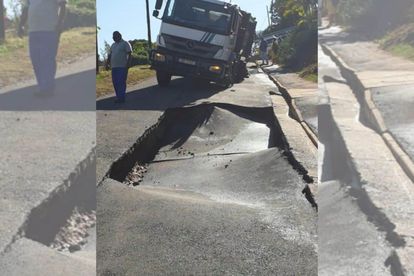 It all started with low water pressure. From there, Ethekwini Municipality councillor Bobby Maharajh was “flabbergasted” when he noticed that several parts of a road in Effingham, Durban North had completely caved in and collapsed.

On Monday 13 July, Maharajh took to Facebook saying that he had never seen a road in “total shambles”.

“A few minutes later my cell beeped and rang continuously. These were complainants from Effingham, Red Hill and Greenwood Park informing me of the low water pressure. I immediately lodged the complaint,” he said.

Thereafter, Maharajh closed his office and drove to Heather Grove, the road on which the water leak was discovered.

“I was flabbergasted when I looked up at Heather Grove from Effingham Road. Never have I seen a road in total shambles. This was like a clip from a disaster movie. Portions of the road, gutters and pavements had collapsed leaving gaping holes in the road. A portion of one lane and the gutter had collapsed,” he said.

Maharajh, attaching pictures to his Facebook post, said there was nothing under the tar to hold it up.

A Durban Solid Waste (DSW) truck had also partially sunk into the collapsed road. What Maharajh saw was just “the warm-up,” however.

“Many angry residents informed me that this was the fourth time that the road had collapsed in 18 months. Absolutely unbelievable. I could not believe what I was hearing. Thank God there were no people or vehicles on the road. There could have been a fatality,” he said.

Maharajh, with an added pun, said it’s going to be a “long road” to recovery.

“In my opinion, Heather Grove demands a resurfacing from the top of the hill to Effingham Road but all possible leaks must be carefully investigated first. What happened to the Umgeni sand and crusher that are normally below the tar? The residents and I also need answers,” he added.

The South African tried to reach out to Metro Police spokesperson Superintendent Parboo Sewerpersad for additional comment, however, he did not respond at the time of publication.