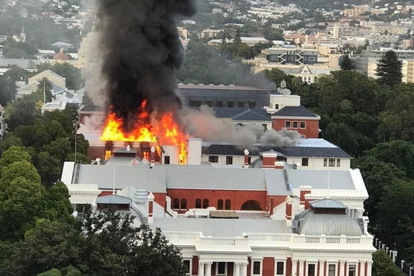 The City of Cape Town has offered their Council Chambers after the Parliament fire. Image: Parliament / Twitter

The City of Cape Town has offered their Council Chambers after the Parliament fire. Image: Parliament / Twitter

Seldom have pictures said so much about a country, its people, and those tasked with leading. The sight of Parliament burning will be one of the defining images and memories of our young democracy for generations to come.

Regardless of the trajectory of South Africa over the next decades, the symbolism encapsulated in the still images and video footage spoke to the very heart of our nation. A brokenness. A national discord. The burning of our Parliament on 2 January 2022 mirrors the loss of our soul, our national identity, and our value system, as well as our collective failure to build a country we can all be proud of.

LOSS OF PARLIAMENT MIRRORS THE LOSS OF OUR SOUL

It spoke at once to the very best of us, as firefighters battled for days against gusting winds and intolerable temperatures and some of us who mournfully bore witness to this national tragedy.

Yet it also spoke to the worst in us, as some of us rejoiced in the physical destruction of most of a national emblem of our history and our collective futures. Some of us seized the opportunity to trigger the debate on whether the legislative capital should be in Cape Town or Pretoria. Some of us engaged in cheap political points scoring.

And that was before our political leaders began the blame-shifting games.

Just days after the fire, the Directorate for Priority Crime Investigation (Hawks) arrested Khayelitsha man Zandile Mafe who was reportedly seen on CCTV footage spending hours alone inside the parliamentary precinct and the Parliament building itself. Mafe has been charged with terrorism, robbery, and arson.

Few South Africans truly believe that Mafe acted alone. And while Mafe is the face of the destruction of Parliament, there are others who are equally at fault. Initial investigations indicate that the sprinkler system was not working and that fire hazard reports from several years ago were not acted upon to avoid a tragedy exactly such as this.

Due to operational reasons, protection services were no longer deployed over weekends, while four on-duty police officers have been suspended for failing to monitor the CCTV footage as Mafe made his way through the hallways of Parliament.

GENERATION OF LEADERS WHO BELIEVED IN PARLIAMENT

Who else should be in the dock with Mafe? Certainly, co-conspirators if there are and if they can be found. Parliament itself for failing to ensure proper management of the institution, including an alleged failure to properly digitise thousands of volumes of invaluable archival material. The Department of Public Works for not maintaining and upgrading security and maintenance systems as would be expected of a national key point, the seat of the national legislature and an important symbol of a country. The security cluster for a range of catastrophic operational and system failures.

What does the destruction of much of Parliament truly mean for us as a nation? Think back to the generation of leaders and people from all walks of life who believed in something greater than themselves to gift us freedom and a chance to build a new, prosperous, and unified nation.

Most of them have now left us, their duty and sacrifice complete. Perhaps it is best that they are no longer around to see what we have done with what they gave us. Their hearts would surely have been broken. Those who did hang on longest, people such as Ahmed Kathrada, Dennis Goldberg, and most recently Archbishop Emeritus Desmond Tutu, spoke the convictions of their hearts to the end as they saw the dreams they helped birth being trampled into the dust. It is small mercies that they were not to be witness to the destruction of a parliament meant for the people.

With each passing seismic event, we seem to be slipping ever deeper into the abyss of our own destruction. Every Courtney Pieters. The wave of anarchy which blighted our country in the middle of 2021. Every corruption scandal. Every Tshegofatso Pule. Every incident of gender-based violence. Both seen and unseen. Every environmental disaster. Every Marikana. Every unnecessary death on our roads.

READ: Up to TEN ‘safety violations’ identified by experts

Parliament in its current form is now gone. Be that by accident, negligence, or deliberate sabotage. The Constitutional Court has also been targeted. What next? After all the buildings, monuments and inanimate objects are gone, will we come for each other? Sadly, we already are. Our interactions are filled with rage, mistrust, othering, abuse, impatience, and so much worse.

Without a shadow of a doubt, the burning of Parliament is a national tragedy. However, it is just one more symbolic step in our descent into darkness as a nation. Yet, just as one’s faith is not defined by a building, so a nation is not defined by buildings and memorials. A nation is defined by its people.

We have more than enough good people in this country, across race, gender, faith, class, heritage, age, and whatever else makes us such a vibrant society, to overcome evil with good and common decency.

READ: These new clues may answer some burning questions

WE MUST RALLY TOGETHER

We must start with ourselves. We can no longer look away and hope things will change for the better. Start with the little things. Do I clean up my litter or leave it for someone else to do? Do I obey the rules of the road? Do I try and leave something in a better or at the least the same state I found it? Once we begin to hold ourselves to account, we can begin to hold those in power to account.

Already there are green shoots all over this country as concerned citizens rally together and take on absent and corrupt municipalities and councillors. Our hearts are touched when we read how ordinary people are coming together to find solutions to community issues or problems rather than sitting and waiting forlornly for services that we know will never come. Or how people from all walks of life came together to support communities, businesses, and families who had suffered such tremendous loss during the civil unrest in 2021.

We are the Parliament of our nation. We are this country’s people. Let’s take back what has been lost. Let’s build the country we all dream of. For ourselves and for future generations. It is the least we can do.