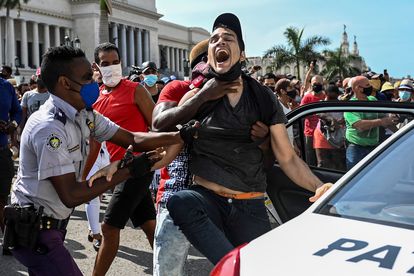 (FILES) In this file photo taken on July 11, 2021 a man is arrested during a demonstration against the government of Cuban President Miguel Diaz-Canel in Havana. – Cuba is imposing sentences of up to 30 years to demonstrators of the July 11-12, 2021 protests that broke out in about 50 Cuban cities shouting “Freedom” and ” We are hungry”. According to Cubalex, 1,355 people were detained, of which 719 are still in prison. Photo: YAMIL LAGE / AFP

(FILES) In this file photo taken on July 11, 2021 a man is arrested during a demonstration against the government of Cuban President Miguel Diaz-Canel in Havana. – Cuba is imposing sentences of up to 30 years to demonstrators of the July 11-12, 2021 protests that broke out in about 50 Cuban cities shouting “Freedom” and ” We are hungry”. According to Cubalex, 1,355 people were detained, of which 719 are still in prison. Photo: YAMIL LAGE / AFP

They are among hundreds of people detained since July 11, when spontaneous street protests in 50 cities saw thousands of people clamoring for change, chanting “Freedom,” “Down with the dictatorship” and “We are hungry.”

Now the axe is falling, with sentences of up to 30 years being handed down on charges ranging from public disorder to sedition.

The family’s ordeal started on July 11 when Exeynt Beirut, 41, was detained in Guantanamo in Cuba’s east on the first day of protests against harsh living conditions and government repression.

When they learned about his fate, Exeynt’s father Fredy, 64, and sister Katia, 36, took to the streets of La Guinera, near their home in Havana, with hundreds of other protesters the following day.

The protest in La Guinera was the most violent of the two-day uprising, and claimed its only recorded death.

Fredy Beirut’s ex-wife, 59-year-old Zoila Rodriguez, said he was arrested the same day, on his way home by motorcycle.

Seven days later, the security forces called in Katia, who reported believing she had nothing to fear.

Instead, she was accused by prosecutors of having filmed the events on her mobile phone in order to publish and encourage others to rebel, according to the charge sheet AFP has seen.

With 158 others, the father and daughter were charged with sedition, according to the Cubalex rights group.

After months in pre-trial detention, both were sentenced, two days before Christmas, to 20 years’ imprisonment.

“When my daughter’s father comes out (of prison), he won’t come out alive, he is 64 years old,” Rodriguez told AFP at her home in Havana.

Exeynt Beirut was given a four-year sentence in a separate trial for public disorder.

Cubalex said dozens of people were injured during the protests of July 11 and 12, and 1,355 were detained, of whom 719 remain behind bars.

The revolt was met by a regime clampdown that elicited global condemnation.

Since then, the government has arrested hundreds more in a bid to instill fear and suppress dissent, according to a recent Human Rights Watch report.

Many were held without due process and subjected to sham trials, and some tortured, it said.

“My daughter and my husband started (to be tried) for the crime of public disorder, which was changed to sedition,” said Rodriguez, who now splits her time between prison visits and caring for Katia’s nine-year-old son.

“Me, my family, all the people going through this are very angry,” she added.

“It is inconceivable that… in a country where people take to the streets and peacefully demonstrate, they are given 20 years.”

The prosecution accuses Fredy, Katia and others of having shouted “counter-revolutionary slogans” and of using “denigrating phrases against the leadership of the country.”

‘THEY HAVE ENDED MY LIFE’

Another La Guinera protester, Dayron Martin Rodriguez, 36, was sentenced to 30 years in jail.

According to his mother Esmeralda Rodriguez, 63, he had gone out to buy food for his pigeons, when he ran into a rally.

“He started recording to send his father the video,” she told AFP by telephone from Ecuador, where she now lives.

He was arrested and charged with being part of a crowd that pelted police with stones and bottles.

His mother said Rodriguez told her by telephone that “they have ended my life.” He will be 66 when he gets out.

Cubalex director Laritza Diversent told AFP the harsh sentences were meant to serve as a deterrent.

The legal process has been plagued by violations of due process, she said, without independent defense lawyers and trials held behind closed doors.

“Most of the evidence they have is testimony from the state agents who used violence against the demonstrators,” she said.

None of the videos put into evidence show the police assaults.

Some families are still fighting.

Andy Dunier Garcia Lorenzo, 34, will go on trial this week after his arrest on July 11 in Santa Clara, central Cuba, with prosecutors seeking a sentence of seven years for public disorder.

His family have launched a campaign to collect food for prisoners and are urging accredited embassies in Cuba to send observers to his trial.

Cuban officials deny the existence of political prisoners in the country. They consider the opposition to be illegitimate and allege it is financed by the United States.