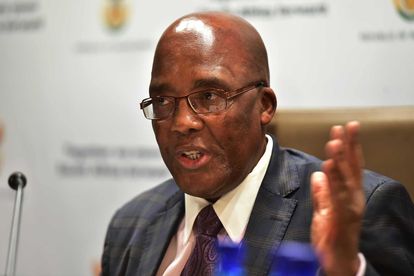 Aaron Motsoaledi cut a frustrated figure on Wednesday afternoon, after he vented his frustrations at a mass escape from a holding centre for illegal immigrants. It’s understood that 37 of the detainees were able to break out of the Lindela facility, but official sources say that this was aided by guards on duty.

The Home Affairs minister said that some of the guards, who were employed by a private security company, left their stations and the centre unattended and CCTV camera footage showed the detainees climbing over walls. Motsoaledi was animated when interviewed by the media, and slammed protesting workers for allowing this incident to happen.

On Tuesday, the Minister dismissed reports of overcrowding at the centre. This was after a video, believed to have been filmed at the weekend, showing foreign nationals inside an overcrowded facility was posted on social media. Aaron Motsoaledi unpacked the tensions that are clearly rising at Lindela:

“These escapes are an inside job because there is a CCTV centre, it works 24 hours. They saw the escapees and they caught them. This place was under liquidation. We inherited the company that guards this place from the liquidator. They had a squabble with workers. This is the preliminary investigation that we’ve got.”

“The workers knocked off at 14:00 and the escape happened at 17:00. I saw through the CCTV camera, they just climbed the walls and escaped through. The guards were just being overpowered because they knew that there are not enough guards they left. So it is an inside job. The company has suspended those guards.”

Not a good look for Home Affairs

The illegal immigrants were awaiting detention back to their home countries before they were given an opportunity to escape. None of them have been rounded-up as of Wednesday afternoon. This is a tough own goal for Home Affairs to concede, and one that has put Motsoaledi and his team on the back foot.

And some of those deportees at Lindela Repatriation Centre were being deported because they had gone to prison in SA. Now they are just on the loose.