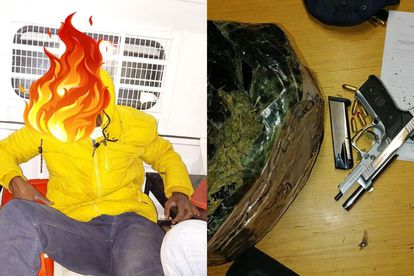 THE ILLEGAL FIREARMS DEALERS ONLY FOUND WITH TWO GUNS

The Tshwane Metro Police Department (TMPD) Tactical Unit members followed up on information about suspects in possession of illegal firearms and selling dagga in Soshanguve, north of Pretoria.

“The members managed to apprehend two suspects at a residence in Soshanguve.”

According to TMPD, the two suspects were found in possession of two illegal firearms and 1kg of dagga.

“They were both arrested for possession of illegal firearms and dagga,” TMPD confirmed.

The arrest of the illegal firearms and dagga dealers were part of five suspects nabbed on the day for various offences.

In a separate incident, the TMPD Drug unit members arrested a 47-year-old male suspect who was selling nyaope at his home in Hammanskraal.

Another arrest was made by the Tshwane Metro Police Cable Theft Unit members. They arrested two suspects at a scrapyard in Pretoria West, the suspects were in possession of suspected stolen property.

The TMPD Cable Theft Unit members also arrested five people last weekend, two male suspects in Pretoria gardens. The two suspects were found with a white sack containing copper cables. A further two suspects were arrested by the same team in Olievenhoutbosch for possession and dealing with suspected stolen cables.
One other suspect was arrested by the Cable theft Team at an informal settlement in Gomora for selling expired food, crimen injuria and resisting arrest.

“Well done to all team members involved. TMPD will continue to fight the scourge of crime in the City of Tshwane,” TMPD warned.