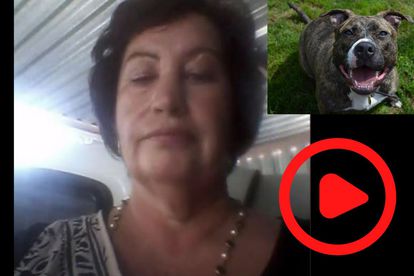 Brace yourself as you listen to the voice note of an elderly woman spewing a disgusting racist rant. It is sickening!

In her one-minute, seven-second rant, the woman is heard saying:

“Estelle, I agree with you wholeheartedly. What I say is: ban the black man. They rape, they steal, they kill, worse than any pit bull could, and they get away with it. Ban those who are making the laws, ban Ekurhuleni, ban the black man. Get all the black women and cut out their uteruses and their ovaries [so] that they can’t procreate because they will all turn out the same because they are all the same.

“I’m very passionate about this. Ban them, kill them, shoot them, and get rid of them because they are the problem — not pit bulls, not animals. Animals are beautiful, and they deserve a warm bed, food, love, attention, and everything else. God created those animals. Who created the black man? Do you think God? I don’t think so.”

According to a report by TimesLIVE, the woman has identified as Belinda Magor, 60, the owner of JCS Office Support, a bookkeeping company in Benoni.

The South African tried to contact Belinda for comment on Friday, but her phone was on voicemail.

LISTEN TO THE VOICE NOTE HERE:

This voice note has gone viral since it leaked from a WhatsApp group called “Pit bulls be my voice”.

‘BAN THEM, SHOOT THEM AND GET RID OF THEM BECAUSE THEY ARE THE PROBLEM’

TimesLives reported that Belinda initially denied being behind the voice note.

Belinda furthermore denied being a racist when a journalist asked her about it.

‘I AM ACTUALLY VERY KIND, SPECIFICALLY TO BLACK PEOPLE’

“I am actually very kind, specifically to black people. You would be surprised. I always help, always.”

She then apparently changed her tune and blamed her diabetes for her hateful rant.

“Well, I am diabetic, you cannot think clearly, you cannot focus, it is like a cloud over your mind.”

BELINDA REPORTEDLY BLAMED HER DIABETES FOR HER HATEFUL RANT

On Thursday, the Pit Bull Federation of SA told the publication that it had been made aware of the racist tirade and the screenshots.

Furthermore, they were disgusted that this kind of narrative still exists in society.

“As we have stated previously, racism has no place in society. Race does not determine any person’s capabilities as dog owner. Human dignity should always be at the centre of how any movement furthers its cause.”