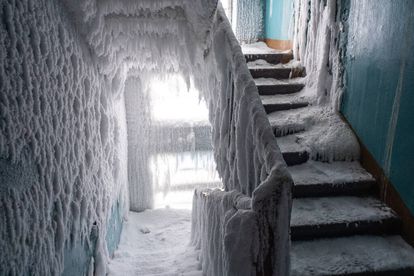 A photographer has captured images of abandoned buildings on the coldest city on the continent. Photograph: Arseniy Kotov/Cover Images

A photographer has captured images of abandoned buildings on the coldest city on the continent. Photograph: Arseniy Kotov/Cover Images

A photographer has captured a series of incredible, icy images of frozen abandoned Russian apartments in Europe’s coldest city.

Photographer Arseniy Kotov, whose work focuses on documenting “architecture and life in the post-Soviet world”, visited icy Vorkuta in February and toured various housing complexes built for workers, many of which were abandoned when the mines closed.

One building in particular, though, is evidence of how desertion continues to unsettle the once-thriving city, an ongoing problem that Kotov captured in a stunning series.

Located about 110 miles from the Arctic Ocean lies the Russian town of Vorkuta, a small mining town that once held one of the largest and most gruelling forced labour camps during Stalin’s reign. The Vorkutlag forced-labour camp at Vorkuta was established in 1932. Mining continued after the Gulags disappeared, but high costs forced many mine closures in the early 2000s.

Over the past two decades, Vorkuta has become something of a ghost town. Often plagued by temperatures as low as -61°F (-52°C), the city now has one of the fastest dwindling populations in all of Russia.

His photographs frame the dilapidated, five-story structure that’s entirely subsumed by feet-long icicles and mounded snow. Relics from former residents and the chipped, blue paint peek through the icy frost, much of which clings to the stairs and banisters and climbs the walls.

Speaking to Cover Images, Kotov said that buildings are often transformed into similarly chilling caves when pipes burst due to lack of maintenance, leading to splashes of hot water, subsequent high humidity, and then ice growth on every surface.

There are an estimated 50,000-70,000 residents in Vorkuta at present, with many abandoned structures littering the landscape. At the time of Kotov’s visit, one family remained in the Severniy-district building, which was still connected to the central heating system that runs through Russian cities, making it easier to pass through some of the walkways thanks to warmth from the radiators.

Although Kotov wasn’t able to meet the sole occupants, he did hear that they moved not long after his tour, with him telling Cover Images: “As I know, locals said that after one week as I visited this building, he and his wife were resettled to another apartment, and this whole building was cut off from all the communications (water, heating, electricity).

“This is a usual story in Vorkuta: as less and less people are left, it becomes unprofitable to heat an entire building, and people are gradually moved to others where there are more inhabitable apartments. Local authorities call it a ‘managed compression strategy.'”

Many of Kotov’s photographs are compiled in his book Soviet Cities: Labour, Life & Leisure, and his second book, which is full of images he captured while hitchhiking around the country, is slated for release in November.

Prints are available from Galleri Artsight, and you can follow Kotov’s sightings and travels on Instagram via @northern.friend. – COVER MEDIA