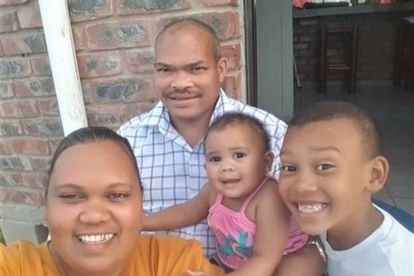 Alfred and Annemique Manho with their two children. Photo: Facebook

Alfred and Annemique Manho with their two children. Photo: Facebook

How do you deal with the trauma of having your nine-year-old son with you when you find your wife in a pool of blood and your little girl dead in the bath?

It is just such an evil, brutal act…

DEBRIEFING HAS BEEN ARRANGED FOR THE BOTH FATHER AND SON

Alfred Manho and his nine-year-old son arrived at their house in Melkhoutfontein near Still Bay on Tuesday.

According to police spokesperson Captain Malcolm Pojie, Alfred and his son could not access the house at first because the front door was locked from the inside.

Alfred let his son climb through the window to open the door from the inside. Upon entering the house, they came upon the gruesome scene.

THE YOUNG MOTHER WAS FOUND IN THE KITCHEN

“They found the 32-year old Annemique Manho lying on the kitchen floor with multiple stab wounds while the lifeless body of the two-year-old Almique Mahno was found in a bath of water.

“Both already succumbed to injuries sustained. An autopsy will be performed on the bodies to determine the possible cause of as well possible time of death,” Pojie said.

ALSO READ: Four BIG changes planned for WhatsApp that you need to know about

TWO-YEAR-OLD ALMIQUE WAS FOUND IN A BATH OF WATER

Police immediately activated its 72-hour plan in mobilisation of all possible resources and specialised units and experts to comb the scene for clues.

“They worked relentlessly throughout the night, which has led to the breakthrough in apprehending the 32-year-old suspect who is a local resident.”

Pojie said debriefing had been arranged for the bereaved husband and son who made the gruesome discovery of the bodies of their loved ones.

A LOCAL RESIDENT WAS ARRESTED

“Investigation is still at a premature stage to divulge more detailed information which might be detrimental to the case. The man will appear in court on Thursday.”

Provincial Commissioner of the Western Cape, Lieutenant General Thembisile Patekile, has expressed his gratitude and admiration towards the dedication of the investigation team that ensured the incarceration of the suspect.

ALSO READ: Father and 3-year-old son brutally gunned down in their car