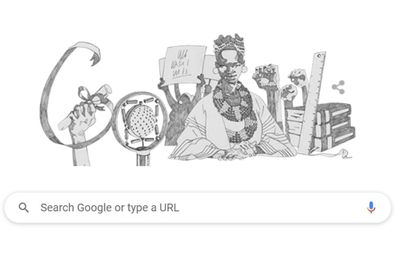 Google doodle celebrates the 151st birthday of Charlotte Maxeke – a religious leader, social, and political activist on Thursday, 7 April. Mam’ Maxeke was the first black woman to graduate with a university degree in South Africa.

Maneli says his dream was to hone in on the fact that Maxete travelled the world with a gospel choir in her youth.

“I tried to imagine what she might have pulled from that experience. I realized that to be in a choir is to understand the value of separate duties, to truly understand what it means to be in harmony. She was not only in harmony with those around her but also with the various facets of her own life, the radical, the performer, the organizer, the student, the traveller, and the teacher.”

THE ORIGINS OF A HEROINE

Maxeke was the focus of Parliament’s inaugural lecture on the Memory Project.

She was the daughter of John Kgope Mannya, a simple man from Botloka village, and Anna Manci, a Xhosa woman from Fort Beaufort. Mannya was a roads foreman and Presbyterian lay preacher while Manci worked as a teacher.

Maxeke had a burning desire to be educated like white people and then return to her home to tackle the problem of illiteracy.

Award-winning journalist Zubeida Jaffer, author of Beauty of the Heart: The Life and Times of Charlotte Mannya Maxeke, says she was a remarkable woman who has long been written out of history and pushed aside.

Maxeke obtained a BSc degree at Wilberforce University in Ohio, the US in 1901 at a time when South African tertiary institutions denied her the right to study in the country.

“Beauty of the Heart pulls together and fleshes out the different strands of her life. It offers the reader historical insight into a woman who deserves to be celebrated by all South Africans,”

THE POLITICAL PATH OF MAXEKE

In 1919 she achieved political prominence as a leader of women against the proposal to extend the pass system to women and founded what was then called the Buntu Women’s League. She then went on to become president of the ANC Women’s League.

According to records from the library of her alma mater, Maxeke led a delegation to Prime Minister of the time, Louis Botha, to discuss the issue of passes for women. A protest against passes for women occurred the following year where Maxeke and 700 women marched to the Bloemfontein City Council and burned their passes.

Although Maxeke was neither a nurse nor associated with the military, a hospital and submarine were named after her. The SAS Charlotte Maxeke received its name in 2007 and the Charlotte Maxeke Johannesburg Academic Hospital was named in 2008.

Her gravesite, a black granite tomb, and headstone framed by four pillars and topped by a roof, in Nancefield cemetery was declared a national heritage site in 2010.

President Cyril Ramaphosa said Maxeke was not just imaginative, innovative, and clever, she was a torchbearer for those who came after her during a tribute last year for her 150th birthday.

The government has declared 2021 as the Year of Charlotte Maxeke.