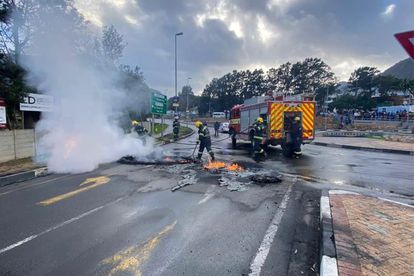 For weeks, protests have been ravaging through the Western Cape and it doesn’t seem to be easing. On Thursday 6 August, police were summoned to Hout Bay and Philippi East.

While protest action has settled in Hout Bay, police are still monitoring the situation in Philippi East.

The South African Police Service (SAPS) Public Order Police (POP) with the City of Cape Town’s Metro police and traffic services were deployed to Hout Bay on Thursday morning to monitor protest action by a group of about 50 women.

According to Brigadier Novela Potelwa the protest took place at the traffic circle near the police station on the Main Road.

“Tyres and rubble were burnt on the road thereby barricading the road. The City of Cape Town’s Fire Department has put out the fires caused by burning tyres and the situation is being monitored,” said Potelwa.

“No arrests have been effected. The situation is relatively quiet,” she added.

When asked why the women were protesting, Potelwa said it was for employment opportunities from the City of Cape Town.

Public Order Police and Philippi East members are monitoring protest action in the area after a group of community members from the Siyangena informal settlement (behind Shoprite and Philippi court) started protesting on Thursday morning at about 4:00.

According to police, the group of protesters are complaining about a lack of electricity in the informal settlement. At the time of publishing, police deployments were on the scene monitoring the situation.

PROTESTS FLARE UP THROUGHOUT THE WESTERN CAPE

In July, protests were reported across the Western Cape. Police were called to areas such as Khayelitsha, Kraaifontein, Dunoon, Mfuleni, Delft, Joe Slovo and Laingsville.

Protests stemmed from service delivery issues and led to severe damage of property. Police communicated that roads were barricaded, stores were looted and protesters took to stone-throwing.

Buses were set alight and two schools were gutted by fire. The protests in Hout Bay and Philippi East appear to be the latest incidents whereby demonstrators have shown their frustrations.