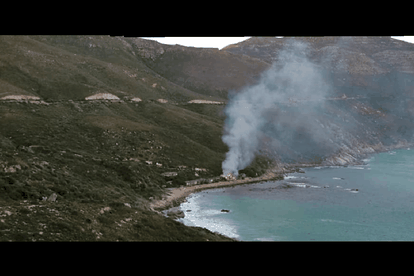 The five-star hotel Tintswalo – nestled on the coast of Chapman’s Peak – caught fire just after 4:00 on Tuesday morning. Although the blaze has been contained, the fire was still burning just before 8:00. Emergency crews and aerial support teams are or the scene to deal with the Hout Bay fire.

Firefighting teams remain prepared for an escalation, despite their efforts to keep the blaze under control. The resort has previous with this type of situation after another devastating fire ripped through Tintswalo in 2015. In the early hours, the roof caught fire and sent plumes of smoke across the bay.

Tintswalo goes up in flames

No cause has yet been revealed by emergency responders, and they are still trying to keep the inferno quelled before any investigations can begin. Theo Layne is a spokesperson for Cape Town Fire Services. He revealed that 26 firefighters and “at least seven vehicles” are currently at the scene. This comes just a week after Lion’s Head was set ablaze.

Thankfully, there are no injuries or deaths to report at this stage of the Hout Bay fire. The hotel staff were able to get all guests out to safety in the middle of the night, and the flames are said to have spread across the entire hotel. Tintswalo could be looking at a painful recovery process, given the extent of the fire.

Image of @TintswaloLodges in Hout Bay up in flames! ?

Hope they manage to save it, was burnt to the ground only a few years ago. Hope everyone is ok too!

City of Cape Town Fire and Rescue Services are responding to a fire near Tinswalo Atlantic in Hout Bay. Kishugu Aerial resources deployed.