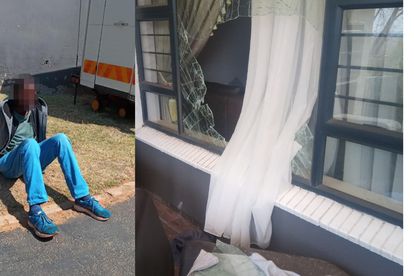 A home burglar was caught in the act amid breaking into a property in Roodepoort, west of Johannesburg.

According to Dowry Group, the incident happened on Tuesday, 23 August in the Constantia Kloof North.

At 11: 38, Dowry Group reported that its Reaction Unit (Y9) received a call of a positive break-in at a property in Constantia Kloof North.

According to the security company, the report was – three male suspects gained access from Disa park side to the client’s premises over the spiked wire using the precast wall.

HOW THE CRIMINALS GAINED ENTRY INTO THE PROPERTY

“Access was gained into the house through one of the back windows that were broken with a brick.”

When all of this was happening, the owner of the property was inside the house hiding away from the suspects, according to the reaction unit.

Upon the reaction officers’ arrival, one suspect was apprehended in the garden of the premises. The other two suspects managed to evade capture and fled the premises.

Dowry Group confirmed that the single suspect was detained and handed over to Honeydew Police for arrest.

The reaction officers were praised for their prompt response and successful arrest of the suspect by the company.