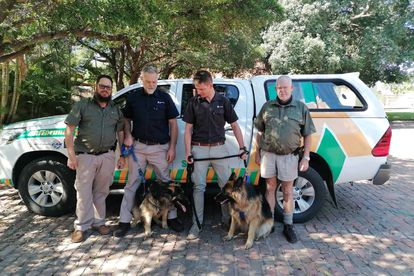 Afriforum gave two sniffer dogs to one of its neighbourhood watches as part of its Border Watch initiative. Photo: Afriforum.

Afriforum gave two sniffer dogs to one of its neighbourhood watches as part of its Border Watch initiative. Photo: Afriforum.

The Department of Home Affairs said it wanted to dispel misinformation about border patrolling along the Limpopo River, especially, in a statement on Monday, 20 June.

The Department said it was aware of a video circulating on social media and news platforms that alleges the minority rights group had taken responsibility for patrolling the border.

“This is blatantly untrue. Members of AfriForum in Musina are patrolling their own farms which are neighbouring the borderline.

“They are certainly not patrolling the general border line outside their farms. If they were doing so, it would have been illegal,” said Home Affairs spokesperson, Siya Qoza.

Afriforum launched a “Border Watch Initiative” earlier this month. The Border Watch donated two sniffer dogs to one of the organisation’s neighbourhood watches in Musina.

“Duke and Hailey will be valuable assets to strengthen the Musina neighbourhood watch’s methods to catch smugglers and seize their smuggled goods.

“The smugglers use the areas with dense bushes to cross the border and these sniffer dogs will assist the neighbourhood watch to quickly get on the trail of the smugglers,” said Jacques Broodryk, Afriforum’s Campaign Manager.

The Department recently finalised the appointment of its first cohort of Border Guards who will be stationed at vulnerable spots of the borderline.

Qoza said the Border Management Authority will rely on lawful partnerships with stakeholders including the SA National Defence Force (SANDF), the police and border communities.

The spokesperson stressed that the responsibility of border patrol belongs to statutory law enforcement agencies and it has not been handed over to any citizens or groups.