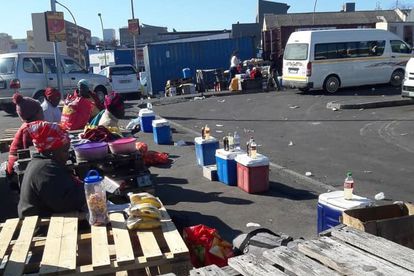 East London taxi drivers have been accused of trying to force commuters to use taxis instead of hitchhiking. Photo: Chris Gilili

East London taxi drivers have been accused of trying to force commuters to use taxis instead of hitchhiking. Photo: Chris Gilili

Commuters hitchhiking to and from East London say they are being attacked by taxi drivers who want to force them to use taxis instead.

Nomahlubi Mapekula from Mthatha said on Monday she was hitchhiking in Southernwood on the N2 to Mthatha when she was attacked.

“Suddenly a silver Avanza pulled up close to me. The two men who came out of the Avanza demanded that I catch a taxi to Mthatha at the taxi rank in Caxton Street.

“I tried to resist going to the rank but they took away my two bags and dragged me by the hand. I resisted anyway and as a result, I ended up not going home.”

She had not reported the incident to the police, she said.

Nolubabalo Bolo, a street hawker in King Williams Town, buys stock in East London. On Wednesday, she said, she was slapped in the face by a taxi driver.

“I was trying to hitchhike at Oxford Street when a white Toyota Quantum pulled up close to me. Three men told me to go to the Shoprite taxi rank. I resisted and told them it’s cheaper if I hitchhike. One of them slapped me. They took my bags and loaded them on the Quantum.”

She had also not reported the incident, she said.

Luvo Williams, from Mooiplaas, a few kilometres outside East London, hitches to and from the city centre daily.

“It’s cheaper to hitchhike. But I have been a victim of harassment from taxi drivers. I was practically dragged out of a Polo on my way to work two weeks ago. The two taxi drivers warned me that I must go and fill one of the empty taxis. I was angry because I was already late for work,” he said.

“Their rude approach is what makes us lose interest in using taxis.”

GroundUp has previously reported on similar incidents in Port Elizabeth.

“Everyone has a right to use whatever means of transportation they see fit. Why are we obliged to use taxis if we don’t want to?,” said Anelisa Zumani who was hitchhiking from East London to Stutterheim.

“I hitchhike every day to and from work. Using a taxi costs R45 but when I am hiking I pay R30,” she said

Taxi driver Mabhuti Mabinda from the Uncedo Taxi Association said hitchhiking was killing the taxi business and drivers could not just stand by and do nothing.

“Taxi driving is our only way of putting food on the table. If people stay away from the taxi rank that means we will not make money. Normally we tell people to come to the taxi rank even if their money is short for the trip. We are quite understanding,” he said.

He urged commuters to use taxis.

“There are risks in hitchhiking like being robbed and kidnapped. We plead with people to avoid that route, especially as we are approaching the end of the year.”

“It is very sad that many people feel that hitchhiking is their only way to get to their destination. It is killing our business.”

But, he said, “We don’t condone violence of any form, even towards hitchhikers.”

“Hitchhiking is not illegal if the motorists don’t break any traffic laws when they stop for people. If taxi drivers are forcing people to use their taxis that is intimidation. It is illegal. And victims are within their rights to lay a charge. People must just be careful when hitchhiking,” she said.