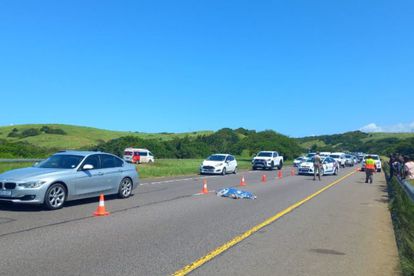 A hitchhiker was killed on Sunday. Photo: RUSA

A hitchhiker was killed on Sunday. Photo: RUSA

A hitchhiker, a 37-year-old woman, was killed when she attempted to cross the busy N2 in the vicinity of Sibaya Casino on Sunday.

THE FATAL ACCIDENT ON SUNDAY MORNING

According to Reaction Unit SA (RUSA) spokesperson Prem Balram, the fatal accident happened around 11:37 on Sunday.

“A 37-year-old woman was killed after she was run over while attempting to cross the N2 in the vicinity of Sibaya Casino – KZN on Sunday.

THE WOMAN WAS DECLARED DEAD ON THE SCENE

He added that reaction officers found paramedics from the Provincial Ambulance Service examining the woman on arrival.

The woman showed no signs of life and was declared dead on the scene.

“It is alleged that the female was hitchhiking when she was run over by a white Mazda CX 5.”

Balram said earlier on Sunday morning that a man was seriously injured after being run over on the southbound lane of the R102 between Verulam & Ottawa – KZN.

ALSO READ: Stepfather dies after he was BRUTALLY stabbed 12 times by stepson

“At approximately 07:48, a member of RUSA was on patrol when he noticed the man running back and forth on the busy road.

“Several vehicles avoided the jaywalker before a white VW Polo ran him over. He sustained serious injuries in the accident.”

RUSA paramedics were called to the scene and, on arrival, stabilized the pedestrian before rapidly transporting him to the hospital by ambulance.

“It was alleged that he had a mental illness; however, this could not be confirmed.”

Balram said the occupants of the VW Polo were not injured.