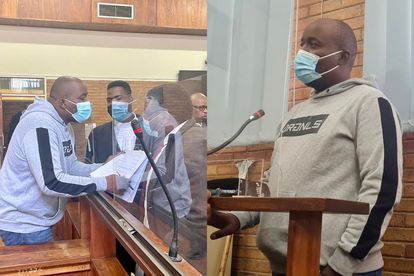 Sipho Mkhatshwa changed his mind about abandoning bail in the murder trial of Hillary Gardee and is in court on Thursday. Photos: Twitter

Sipho Mkhatshwa changed his mind about abandoning bail in the murder trial of Hillary Gardee and is in court on Thursday. Photos: Twitter

The death of Hillary Gardee continues to haunt the nation and this week the murder trial continues as Sipho Mkhatshwa is in Nelspruit Magistrates’ court for his bail hearing on Thursday.

He had originally abandoned his bail bid, along with his co-accused Albert Gama and suspended ANC employee Philimon Lukhele. However, on Tuesday last week, Mkhatshwa changed his mind and began his bail proceedings.

Mkhatshwa took to the witness stand to give oral evidence for his bail application. He is breaking down his version of events in his submitted affidavit of events. Proceedings are still underway.

The National Prosecuting Authority made it clear on Thursday that it is opposing bail being granted to Mkhatshwa. This is due to the severity of his charges.

He is facing schedule six charges for his alleged involvement in the kidnapping and murder of Hillary Gardee.

EFF IN FULL FORCE AT COURT

The 28-year-old daughter of former EFF secretary-general Godrich Gardee, Hillary, was found next to a pine plantation on 2 May alongside a gravel road outside Mbombela, Mpumalanga. The dismal discovery came after a search was mobilised to find Hillary who was presumed to be missing at the time.

She was kidnapped in the town on April 29 while travelling home with her adopted three-year-old daughter. Gardee’s daughter was subsequently fine and is in the safe care of family.

EFF spokesperson Leigh-Ann Mathys says the party’s leadership along with the Gardee family are attending court.

“This is after the gruesome kidnapping and murder of their daughter, Hillary. One of the accused, Sipho, his bail hearing is scheduled for today at the Nelspruit Magistrates Court.”

The party has made its stance abundantly clear in that they oppose the possibility of Mkhatshwa being denied bail.