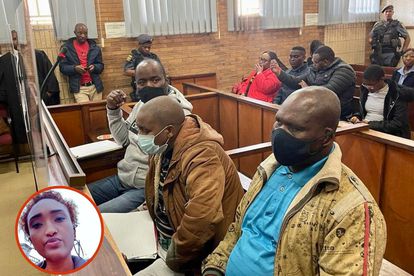 Sipho Mkhatshwa, Philemon Lukhele and Alberts Gama have been charged with plotting another murder while behind bars for the alleged killing of Hillary Gardee. Photo: @EFFSouthAfrica and @HillaryGardee / Twitter

Sipho Mkhatshwa, Philemon Lukhele and Alberts Gama have been charged with plotting another murder while behind bars for the alleged killing of Hillary Gardee. Photo: @EFFSouthAfrica and @HillaryGardee / Twitter

The three men accused of murdering Hillary Gardee were back in court on Thursday, 7 July, following a number of delays.

Sipho Mkhatshwa, Philemon Lukhele and Alberts Gama appeared before the Nelspruit Magistrate Court. The men are accused of killing 28-year-old Gardee, the daughter of the former secretary-general of the Economic Freedom Fighters (EFF) Godrich Gardee.

Trio accused of plotting another killing while behind bars

During the proceedings, a shocking revelation was made by prosecutor Ntsika Mpolweni. Mpolweni revealed that the State would be adding an additional charge to the accused’s sheet.

That being of the conspiracy to commit murder. Mpolweni said he was unable to provide more details on who the trio plotted to murder.

“For safety reasons, the state will not divulge the name of the person who was to be killed,”

Mkhatshwa, Lukhele and Gama have been in custody since the body of Gardee was discovered in a bush in May. Lukhele and Gama initially chose to not apply for bail but were expected to launch a fresh application on 7 July.

The matter has been postponed to 22 of July 2022 when the bail application of accused 1 will continue.

Previously, it was reported that EFF supremo Godrich Gardee has dropped a bombshell on Monday morning, claiming that he witnessed damning evidence in relation to the murder of his daughter. Hillary Gardee was slaughtered earlier this year in Mpumalanga, but the police response has been criticised.

Officers supposedly missed crucial evidence at the crime scene, forcing the Gardee family to employ their own private investigators. The EFF’s Head of International Relations now believes that SAPS are simply sitting on evidence that could be crucial for cracking this case.

He alleges that there is a video of the suspects withdrawing cash – using Hillary Gardee’s card in the moments before she was murdered. In this clip, the number plate is meant to be clearly visible… but no arrests have been made as a result of this new footage. Read the full story here.