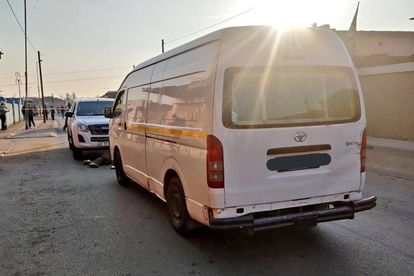 JMPD officers found the hijacked vehicle with the owner tied up inside in Meadowlands, Soweto. PHOTO: JMPD

JMPD officers found the hijacked vehicle with the owner tied up inside in Meadowlands, Soweto. PHOTO: JMPD

A hijacker was nabbed in Soweto in a movie-like scene which involved a car chase, crashing into multiple vehicles while the victim was tied up inside his own vehicle.

The Johannesburg metro police department’s (JMPD) K9 unit nabbed the 50-year-old male while his accomplice ran off with a bullet wound.

ALSO READ: BREAKING: At least 14 people shot and killed at a tavern in Soweto

This all happened on Saturday while JMPD were conducting their usual crime prevention patrols. This is when they received an alert to look out for a Toyota Quantum which was hijacked in Langlaagte, said JMPD spokesperson Xolani Fihla.

The alert stated that the driver of the Quantum was kidnapped during the hijacking.

“Officers spotted the hijacked vehicle travelling along Odendaal Street in Meadowlands. They attempted to stop the vehicle but the suspects sped off and a high-speed chase ensued.”

CAR CHASE TURNS TO SHOOT OUT

During the chase, the suspected hijackers started shooting at the officers. In the attempt to evade the police, they crashed into several vehicles until they were finally cornered in Hlungwane Street.

One suspect was shot by the JMPD officers but managed to flee with the bullet wound, Fihla said.

The driver was arrested and was found in possession of an unlicenced firearm with the serial number filed off. Live ammunition was also found.

“When searching the vehicle, the hijacked victim was found tied in the Quantum and was rescued by the officers,” said Fihla.

The arrested suspect, who clearly failed in his escape attempt, now faces multiple criminal charges. These include attempted murder, kidnapping, possession of an unlicenced firearm, ammunition, and a hijacked motor vehicle.

“The arrested suspect was detained at Meadowlands SAPS… He is due to appear in court during the course of the week. The hijacked vehicle was seized and booked in at Lenasia [police station] pound for verification.”