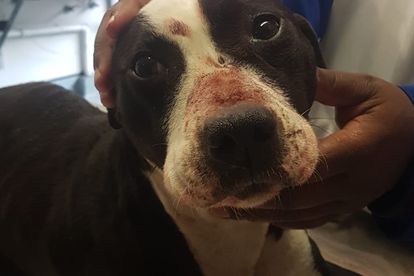 It took Molly, a female Pitbull, mere seconds to realise that her family’s life was in grave danger, and she unhesitatingly flew into action to protect them from the armed assailants during a home invasion earlier this month.

MOLLY WAS STABBED COUNTLESS TIMES IN HER HEAD AND BODY

Molly has been hailed a Hero by a family of Rocklands who survived a horrific home invasion thanks to her protective instincts.

“We tried our best to save Molly, but sadly, she had lost too much blood, and her injuries were too severe.”

It said despite being beaten and stabbed countless times in her head and body Molly put up a very brave fight during the home invasion, and the assailant quickly realised that he had more than met his match and decided to beat a hasty retreat leaving Molly dying in a pool of blood on the floor.

“Molly had lost so much blood that the room resembled a “murder scene” and in between lapsing in and out of countiousness she desperately tried to get up to continue defending the hysterical occupants.”

The AWS said Pitbull Terriers are arguably the most misunderstood of all dog breeds.

“Humans have sadly exploited and abused the breed for centuries to the detriment of the breed and society as a whole.

“These days one hardly ever hears or reads anything positive about this beleaguered breed which is why we felt it necessary to share Molly’s heroic story with you.”

“Anyone who has ever owned a properly socialised Pitbull who has been made to feel a part of the family will readily attest to the courageous nature of these brave dogs who regardless of the size or nature of the threat to themselves or those they hold dear to their heart will willingly lay down their lives in defence of those they cherish.”