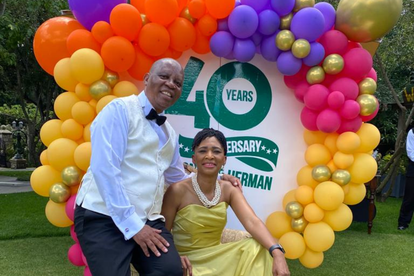 ActionSA leader Herman Mashaba is gushing over his union with wife, Connie, as the couple celebrate their 40th wedding anniversary this weekend.

Taking to social media, Mashaba shared some touching photos of the pair during varying stages of their shared lives.

“Today we are officially celebrating our 40th Wedding Anniversary with family and friends.”

Mashaba admitted that it hasn’t all been smooth sailing, saying the the past four decades have been ‘hard work’.

“Forty years ago, on March 3, 1982, Connie Mashaba and I made our most important commitment. It’s been four decades of love, hard work and support.”

Despite the challenges, Mashaba says that he remains optimistic about the future of both their union and his political career.

“Thank you for everything, my love. Looking forward to changing the course of SA’s future with you,”

ActionSA leader no stranger to public displays of affection

Mashaba is hardly new to sharing such sentiments about his wife on social media for the whole country to see. The former DA politician is often seen supporting Connie’s own achievements and it’s nothing short of inspirational.

Previously, Mashaba had celebrated his wife earning her MBA from Wits Business School in another post to social media. In the touching post, Mashaba says his wife receiving her degree at the age of 60 inspired him.

“Another proud moment for a husband. It is my great pleasure to be associated with this special woman. Just graduated with an MBA from Wits Business School on Friday, at the age of 60. A real inspiration indeed,”

During an earlier anniversary, the ActionSA head declared that he owed so much to his beloved partner.

“I owe so much to you. I would never have been the man I am today without your love and support. Here’s to many more years together as we build the SA of our dreams,”