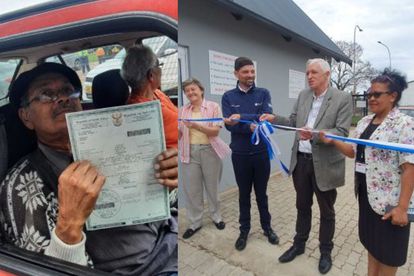 And it is as easy as handing over your registration document, paying, and then having your license printed immediately.

This first-of-a-kind drive-through service for motor vehicle license renewals was officially launched on Monday in George, the Western Cape.

EASY AS HANDING OVER REGISTRATION DOCUMENT, PAYING AND HAVING LICENSE PRINTED IMMEDIATELY

According to Ntobeko Mangqwengqwe from the Office of the Municipal Manager, the George Municipality’s traffic services turned what was a dilapidated building into a brand-new Motor Vehicle and Registration (MVR) satellite office.

“This includes a drive-through service for the renewal of motor vehicle licenses. This MVR centre, is located at 9 George Street in Blanco, a suburb situated north-east of George.”

Mangqwengqwe said this is an extension of the existing MVR centre stand, would handle drive-through service for customers to renew up to a maximum of two Motor Vehicle Licence’s at a time, and will also handle bulk MVR services at the inside counters.

THIS CENTRE WAS LAUNCHED IN GEORGE, IN THE WESTERN CAPE

“George is growing at a rapid pace and what we found at our existing motor vehicle registration centre is that it was starting to get cramped, and people that came for services needed to stand in a queue. This situation forced us to think creatively and innovatively, and so we started improving the services by providing an undercover space for the customers, thereafter, introducing an online system so that a customer can pay online and come to collect the actual license afterward.”

An ecstatic senior citizen, John Allenby Stoffels, was the first resident to renew his motor vehicle license in a brand new and the first drive-through service for licence disk renewals in George.

“I never thought that I’d renew my car disk in the comfort of my car, just like buying food from a drive-thru restaurant, it’s is always a challenge for us senior citizens to stand in long queues waiting for a service; the George Municipality has now made it easily accessible for us, this is great, and I’m happy to have been the first to experience this,”