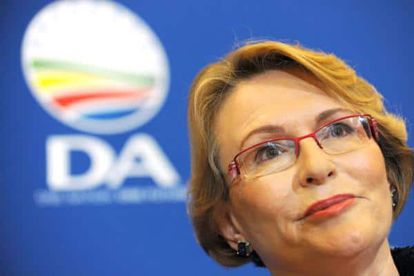 Zille says she is prepared to take the national government to court should her office not receive a satisfactory response from the minister.

The Premier alleges that the Western Cape government has done all it can to control a murder rate that has risen by 12.6% in the last year. Zille highlighted that in some areas of the Western Cape police numbers were well below the national average.

Speaking to a press conference in Cape Town on Wednesday Zille said:

“We have scoured legislation and the constitution‚ we have passed our own laws and we have stretched our constitutional mandate of oversight and partnerships to the limit.

“It’s all had a profound effect‚ and we can correlate improvements in crime patterns with interventions we’ve made.

“But the one job only the police can do — investigating crimes and gathering evidence to secure convictions — has become the weakest link in the criminal justice chain.”

Zille has given Cele thirty days to respond to her letter which requests, among other things, a pledge that extra officers will be allocated to the priority areas of gang crime‚ rail safety‚ attacks on schools‚ protection of infrastructure and ambulance crews‚ and public order policing.

Zille would also like national government to accept the Western Cape’s offer to pay additional police reservists and assist with administrative tasks.

A special police committee has been called to act against gang violence, both in the Western Cape and in Gauteng, where the Westbury protests has brought the issue into the spotlight.

It’s not the first time Zille has made demands of a police minister. Earlier this year, she threatened court action against Cele, demanding he acts on promises which were not filled by his predecessor‚ Fikile Mbalula.

One of those promises was to send the amry into the Cape Flats.

At the time, Zille said:

“I’m at a point where I want to take legal action if the problem is never remedied by the powers that be. I’m seeing Minister Cele today. There are times that a civil authority loses control over the entire area. That’s often the case in Manenberg where we can’t deliver services. You cannot even put fibre into the ground to connect the schools to broadband because the gangs say that unless you pay them protection money, people who come service and lay that fibre are not allowed in the area.”

Cele responded by accusing Zille of contradicting herself in the way she’s dealing with the issue.

“It was Helen Zille who was leading the good work of the South Africa police and praising them. Why today is she not saying the same thing, that the job is good. They have sustained and maintained the order in that area. 154 police have been put there. We have promised extra if they are needed.”