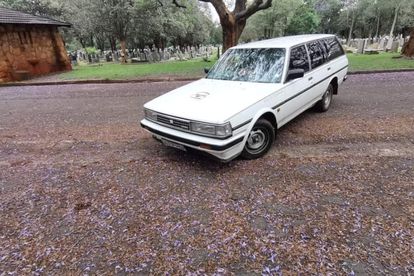 A hearse was stolen in Eldorado Park with two infant bodies inside. PHOTO: Twitter/@VehicleTrackers

A hearse was stolen in Eldorado Park with two infant bodies inside. PHOTO: Twitter/@VehicleTrackers

A hearse which had two infant bodies inside was stolen in Eldorado Park on Friday the day before the babies were to be buried. The babies were still-born.

The incident happened on Friday when the undertaker went to the Home Affairs Department to quickly collect the deceased babies’ death certificates.

According to Ward Councillor Dwain Ponsonby, the undertaker came out and found the hearse, a Toyota Cressida, was gone.

“The undertaker went to Home Affairs toD pick up the death certificates because he registered the deaths, according to him. He pulled up and quickly ran into Home Affairs.”

HEARSE DISAPPEARS WITH BABIES INSIDE

When the undertaker comes out, he discovers the car was stolen along with the still-born babies inside the vehicle.

The suspect drove off with the deceased babies in the back in an attempt to sell the car in Midway, said Ponsonby.

“I am the counsellor of the area and I got word of this. I went to the police station and the police were out looking for the hearse with the undertaker.”

INFANTS AND HEARSE FOUND BEFORE CAR WAS SOLD

But the thief of the hearse was caught by the police in Midway, just before the car was sold off.

The babies were fortunately still inside the car, said Ponsonby.

“The suspect was found and so were the children. They were buried [Saturday] morning at 07:00.”

While people on Twitter were making fun of the car being too old to be stolen, a Toyota Cressida is now an expensive vintage car, costing more than R230 000.