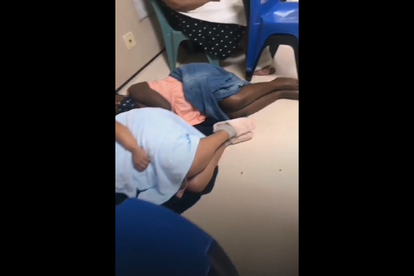 A video showing pregnant women sleeping on the floor at Rahima Moosa Hospital in Johannesburg was widely circulated online.

A video showing pregnant women sleeping on the floor at Rahima Moosa Hospital in Johannesburg was widely circulated online.

The Congress of the People (COPE) has called for the National Health Department to be placed under Administration in the Presidency.

The party said it is quite clear that the Health Department in the country is on the verge of collapse. All health facilities nationally are struggling to execute their Constitutional mandate of servicing patients.

COPE CALLS FOR HEALTH DEPARTMENT TO BE PLACED UNDER ADMINISTRATION

COPE spokesperson, Dennis Bloom said there is a shortage of medicine at almost all hospitals and clinics. In  some cases there are no medicines for weeks.

Bloom said when one talks to doctors and nurses at the health facilities, hospitals and clinics, they say they are stressed, exhausted and are looking for help.

“They want to treat their patients but they cannot because of a lack of medicines. Almost all health facilities are having a serious shortage of staff and an added problem is overcrowding.

It will not help the situation if the Government keeps on denying that there is a problem. We believe that the solution to this problem is for President Ramaphosa to urgently intervene and place the Health Department under Administration in the Presidency.”

EMBASSIES COULD BE CHARGED FOR TREAMENT OF FOREIGN NATIONALS

The DA in Gauteng has called for the Health Department to start charging embassies for the treatment of foreign nationals in public hospitals.

Gauteng public hospitals have been in the spotlight lately for not so good reasons.

“Foreign embassies should be billed for patients from their countries who are treated in Gauteng hospitals – this is a practical way to deal with the issue of foreign patients overburdening facilities, as seen in the video of pregnant women sleeping on the floor at the Rahima Moosa Mother and Child Hospital in Johannesburg.”

“Some years ago the Gauteng Health Department claimed that they were going to bill foreign embassies but nothing seems to have come from this. While most foreign patients live in South Africa, there are many cases where pregnant women from surrounding countries come to a South African hospital specifically to give birth.”