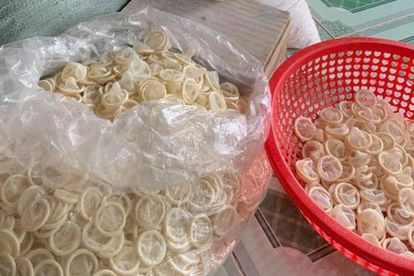 In what may well turn out to be a candidate for the grossest news story of the year, police in Vietnam have closed down a business that was collecting hundreds of thousands of used condoms and then washing them and selling them off as new.

According to a report by the Vietnam Explorer news channel, officers raided a factory and found workers there with a consignment of around 320 000 used condoms.

Their job was to wash them, dry them, sort them and ‘reshape’ them so that they could be ready for new customers.

Also on site were 360kg-worth of the sheaths that had already been ‘recycled’ and were due to go back on sale to the unsuspecting Vietnamese public.

When she was questioned by the police, a 32-year-old woman who was renting the facility told them an unknown person delivered thousands of used condoms to her each month and she was paid to supervise the recycling process.

Will be destroyed as hazardous waste

It seems the condoms were then picked up again and packaged and labelled for sale at another location.

All of the offending items have now been confiscated by the Vietnamese authorities to be used as evidence in their investigations.

Thereafter, they will be destroyed as they are regarded as hazardous medical waste, spokesperson Tran Van Tung said.

A contender for the ‘worst job’ award?

Authorities believe thousands of the unsanitary condoms have already been sold, according to local media reports.

A report on the incident in the Miami Herald newspaper quoted the US Centre for Disease Control as saying that reusing condoms can lead to disease and infection.

Apart from being a contended for the grossest news story of the month, this may very well also be a contender for the ‘And You Thought Your Job Was Bad’ award for 2020.