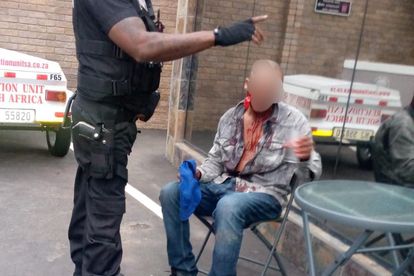 A municipal worker was stabbed in his face, and his cheek was partially torn off during a robbery.

“An Ethekwini Municipality employee was seriously injured after he was stabbed in the face during a robbery in the Verulam CBDin KwaZulu-Natal on Thursday.”

HIS CHEEK WAS PARTIALLY TORN OFF

“The municipal worker’s right cheek was partially torn off. He informed Reaction Officers that he was confronted by five suspects who attacked him without warning before stealing his Samsung cellphone and wallet. The victim thereafter walked to the RUSA Headquarters for assistance.”

Balram said he was transported to a medical facility for treatment.

Meanwhile, the bloodied body of the former KZN Mayor was found in a cane field opposite his homestead in Canelands on Thursday morning.

This comes after the one-time Mayor of Verulam Manna Naidoo (74) was allegedly abducted as part of a rushed farm attack on Wednesday.

According to Reaction Unit SA (RUSA) spokesperson Prem Balram, Naidoo’s bullet-riddled body was recovered by a search team who were patrolling the cane fields.

“An intense search was conducted by members of Reaction Unit South Africa (RUSA), the South African Police, Community Organisations and Civilian Volunteers throughout yesterday and resumed this morning. He appears to have been shot multiple times.”