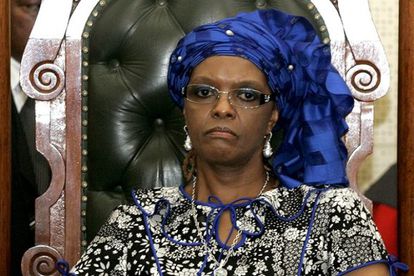 Zimbabwean First Lady Grace Mugabe listens to the address by President Robert Mugabe during the official opening of the last session of Zimbabwe’s parliament on October 30, 2012 in Harare. The session was the last before next year’s elections which are expected to end an uneasy coalition government Mugabe formed in 2009 with Prime Minister Morgan Tsvangirai. AFP PHOTO / Jekesai Njikizana (Photo credit should read JEKESAI NJIKIZANA/AFP/Getty Images)

Zimbabwean First Lady Grace Mugabe listens to the address by President Robert Mugabe during the official opening of the last session of Zimbabwe’s parliament on October 30, 2012 in Harare. The session was the last before next year’s elections which are expected to end an uneasy coalition government Mugabe formed in 2009 with Prime Minister Morgan Tsvangirai. AFP PHOTO / Jekesai Njikizana (Photo credit should read JEKESAI NJIKIZANA/AFP/Getty Images)

Zimbabwean leader Robert Mugabe’s wife Grace seems to not be able to get enough attention, as she has accepted a doctorate degree from the University of Zimbabwe (UZ) shortly after being nominated as the leader of the ZANU-PF Women’s League. The award of the degree has attracted a great deal of controversy, with several high-ranking university officials criticising the move, as it appears that Mrs. Mugabe was never enrolled at the academic institution.

A UZ professor, who preferred to remain anonymous, said that deans and senior lecturers “want to engage the council demanding an explanation on how the university awarded Grace Mugabe a PhD. We have checked university, department and faculty records, from registration, the academic committee, research and attendant issues like supervision both internal and external and exam processes; there are so many gaps and question marks. It seems procedures were simply not followed and this is an indictment on her and the university itself.”

A letter of protest is planned among other actions the university intends to take to investigate the first lady’s academic award, signalling that they deem the move unjustified and inexplicable. In most territories, including Zimbabwe, a PhD requires a minimum academic commitment of three years.

Another academic clarified that the row is “less about the graduate herself and more about the university’s reputation which is under scrutiny and at stake.”

Grace Mugabe had dropped out of a Bachelor of Arts degree programme at the University of London in 2004 after failing the majority of her exams there. Her regained academic strength casts doubts over the integrity of the University of Zimbabwe and raises the question whether her political influence wasn’t the chief determinant behind the move. With this kind of adversity ahead of her, the future may indeed be an uneasy path to walk for Grace Mugabe, as criticism for her lack of achievements and experience appears to grow on multiple fronts.

She had spent months preparing her entrance into politics through the ruling party’s Women’s League, where she was elected into the leadership of the ZANU-PF Mashonaland West Women’s League central committee in the party’s Zvimba district. Mrs. Mugabe had stood unchallenged for the position. Nevertheless, in the run-up to her election, the first lady had attacked various of her political opponents in that direct, accusative style, which otherwise is only ever attributed to her husband’s style in rhetoric.

As the ailing and aging statesman is seen less frequently during public engagements these days, questions have started to arise on whether Grace Mugabe might be in the process of being groomed for a higher public office in future, with the next general election in Zimbabwe already scheduled for 2018. The 49-year-old first lady meanwhile remains admired throughout Zimbabwe as the country’s spiritual mother as much as she is for her opulent and extravagant lifestyle – as long as you don’t account for the voices of dissent, that is.