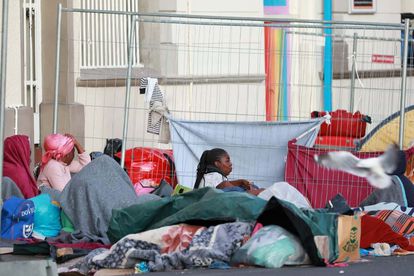 The departments of public works and home affairs issued a joint statement on Monday 6 April, criticising the City of Cape Town for its backtracking regarding the housing of refugees who were evicted from the Central Methodist Church on Greenmarket Square.

“The recent events unfolding in Cape Town regarding the relocation of asylum seekers and refugees, including untrue statements peddled by the officials of the City of Cape Town and the executive mayor in the public domain has compelled us to take an unusual step to issue this joint press statement,” it said.

Some of the Cape Town refugees who were removed from the Methodist Church on Thursday 2 April, have now taken up residence at Paint City in Bellville, while others still need to be moved.

Land identified for refugees, owned by the military

The removal of the asylum seekers and refugees from the Central Methodist Church and Greenmarket Square has been a subject of two court judgments issued on 17 February and 17 March.

The committee instructed the Department of Home Affairs and the City of Cape Town to together work out a comprehensive plan to resolve the impasse.

It was agreed at the meeting that Western Cape Premier Alan Winde would, through the Home Affairs Minister Aaron Motsoaledi, request the Public Works and Infrastructure Minister Patricia de Lille, to approve the land identified by the provincial government.

“The request was not successful as it was discovered that the land identified by the provincial government belonged to the military. There were exchanges back and forth as the City of Cape Town kept on rejecting pieces of land after another for unknown reasons. This is despite the fact that the minister of home affairs [Motsoaledi] indicated in the letter to the premier [Winde] that he had reason to believe that the city owns vast tracks of land which could be made available.”

Two other sites identified for refugees

De Lille invited the City of Cape Town Mayor Dan Plato for site visits which led to the identification of Paint City and Wingfield for the temporary shelter of asylum seekers and refugees.

The initial letter from Winde also included a request for the South African Police Service (SAPS) to assist in the removal of the refugees from the church and the streets of Cape Town. The refugees were removed from the church on 2 April.

According to the statement, the city backtracked big time.

The reason was that the city had identified the site for the homeless people and that a marquee which was erected by the Department of Public Works did not comply with the disaster regulations.

“At the time, the City of Cape Town had already reneged on the provision of tents, sanitation and water as initially agreed,” said the statement.

Over and above the letter, the officials of the City of Cape Town allegedly embarked on some clandestine activities to disrupt the plan and the evacuation of the refugees.

“These activities included contacting bus operators to discourage them from ferrying the refugees and veiled threats to the provincial officials of the departments of public works and transport,” it said.

The country does not need ‘misguided bickering’

De Lille apparently set the record straight in a letter on 3 April.

She said an agreement was reached which is not what the city claimed at a later stage.

“I am extremely disappointed that in this time of crisis, the basic humanity and upholding the principles of the Constitution of South Africa have been tossed aside by the City of Cape Town, in order to facilitate a selfish land-related agenda. This is not in any way acting in good faith. I am also aware that your agreement with me, Mr Mayor, was overruled by Alderman Nielson and Alderman JP Smith,” she said.

“The attitude of the City of Cape Town deserves to be condemned in the strongest terms possible. What the country needs in this time of crisis is responsible and visionary leadership and not misguided bickering,” she added.