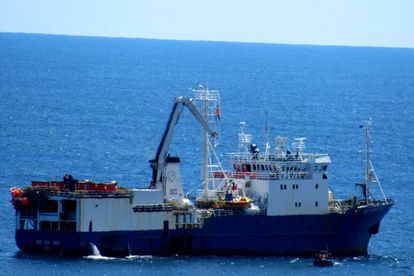 A rescue ship is en route to retrieve the 62 people who were forced to abandon the sinking Geo Searcher research vessel near the Gough Island in the South Atlantic. Photo: Twitter/ Tristan da Cunha
@KellyGrTDC

A rescue ship is en route to retrieve the 62 people who were forced to abandon the sinking Geo Searcher research vessel near the Gough Island in the South Atlantic. Photo: Twitter/ Tristan da Cunha
@KellyGrTDC

Efforts to rescue 62 seafarers – including 47 South Africans – are underway after a research vessel struck a rock near the Gough Island in the Atlantic and began sinking.

The Geo Searcher research vessel struck a rock earlier this week and was damned to the cold Atlantic waters some 2 500km outside of Cape Town, but fortunately all on board were able to disembark as the ship went down and make their way to the island, where the South African research station is located.

The cause of the incident has not yet been established.

The South African Maritime Safety Authority (Samsa) said in a statement on Friday morning that one member of the research team sustained minor injuries, but that the rest o the crew are all accounted for and unharmed despite having had to navigate choppy, cold waters to get to safety.

“The seafarers managed to climb into lifeboats and other on-board small craft before making their way from the northern point of the island around to the southern region close to the SA research station,” they said.

“They were assisted ashore and are all reported to be accounted for. It has been reported that one seafarer sustained some minor injuries.”

Another South African research vessel, the SA Agulhas II, has been sent to collect the seafarers, and is expected to reach Gough Island on Monday after a three day voyage. The vessel is carrying two helicopters which Samsa sad will “greatly assist in the transfer of the stricken seafarers from the island to the vessel”.

“It is expected that the vessel will then make its return voyage arriving by possibly next week Friday or Saturday,” they said.

Samsa’s Sobantu Tilayi told eNCA on Friday that the incident is unfortunate but that he is relieved that all who were on-board have been accounted for.

“We needed to coordinate the rescue effort for the crew, and fortunately we had the SA Aghulus II that is owned and operated by the Department of Environment and Fisheries.,” he said, adding that the rescue ship had arrived at Cape Town port and offloaded researchers from a separate voyage on Thursday before being told to turn around and collect the stranded researchers.

“We were fortunate that the island was nearby and they could get to the South African research centre,” he said.

“The ship left Cape Town at 6:00 on Friday morning, and embarked on the three-day voyage to the Gough Island. We hope that we will make good time, but all survivors are at the base. There is a medical person with them so we hope that we will have them all back safely in three days.”

“The base is build for 20 people but the Chief Director said that they would be able to support the additional people for a few days.”

He said that the accident’s cause is likely to be a “navigational issue”, but that an investigation into the incident is ongoing.