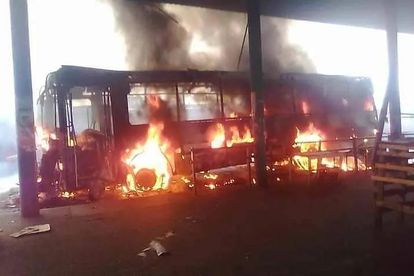 One of the Golden Arrow buses that was petrol bombed. Image via Twitter/@VehicleTrackerz.

One of the Golden Arrow buses that was petrol bombed. Image via Twitter/@VehicleTrackerz.

Golden Arrow Bus Service will not be operating in Nyanga and Philippi after four buses were petrol bombed on Thursday 25 August.

Golden Arrow Bus Service spokesperson Bronwen Dyke-Beyer said they are not able to operate in the area and will be starting and terminating all Nyanga services from Borcherds Quarry.

“We condemn these senseless acts of violence and call on the authorities to fulfil their mandate of keeping our employees and passengers safe and ensuring that the perpetrators face the full might of the law,” she said.

CITY OF CAPE TOWN WEIGHS IN ON ATTACKS

Smith said officers impounded 21 vehicles in terms of the National Land Transport Act – 19 ‘amaphela’ taxis and two minibus taxis, for operating without a valid permit or operating in contravention of the conditions set out in their permit.

Smith said the violence that followed is no coincidence and this appears to be the modus operandi every time that enforcement services move into this area in particular, to do their jobs.

“The last such incident was recorded in March this year, and just over a year ago, we witnessed similar violence in the Nyanga area. This level of lawlessness is unacceptable and we will not be deterred.

‘It cannot be the case that a small group of instigators want to hold us hostage and escape accountability for their actions each and every time. Enforcement occurs throughout the city, and the law has to be applied equally to all.”

The City of Cape Town’s enforcement services are reportedly working closely with the South African Police Service to track down the persons responsible for the attacks. The public has been advised to exercise caution in the Nyanga/Philippi area, and service delivery vehicles have been advised to withdraw from the area until the situation has stabilised.