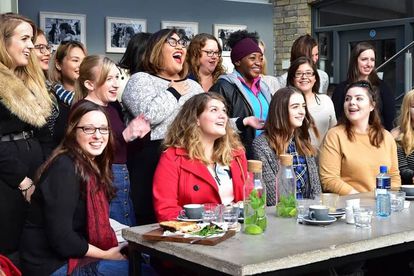 Girl Crew has arrived in South Africa. Its introduction couldn’t be more timely, as we celebrate Women’s Month this August. But why has this “friendship app” become so globally popular?

Well, as some of the more keen-eyed detectives may suspect, the platform is solely for the use of women looking to make a few mates and bypass the rigours of social interaction.

What does Girl Crew offer women?

What Girl Crew does brilliantly is cut right to the chase. By downloading the app and joining the group, you can post about what activities you enjoy and talk about your own interests. If someone else is into what you are, then you can agree to hang out.

So, for example, if there’s a concert you really want to go to but no-one else you know is up for it, you could take to Girl Crew and find out if anyone else is going. Members can then go to the event together, with the safety and security of having a like-minded friend for company.

Aine Mulloy is the CMO of the company. We spoke to her before they officially launched in Cape Town last week, and she told us why Girl Crew is the perfect tool for building relationships in the 21st century.

We might as well call it the “Swiss Army App”, such is its versatility. Not only can it ease women into new friendships, but Mulloy explained how it can also be used to solve some of your more personal problems.

“Once you finish college, it gets harder to make friends. This is more of a support network, too. You can raise anything, ranging from concerns about finding plumbers, to needing information about parking in town.”

“We’ve got a real all for one, and one for all type of vibe. Women are great for backing each other, and when we come together we all grow as a team. We’re seeing this every day on the app and it is fantastic. Girl Crew allows for more connectivity and links you with your community.”

It wouldn’t do GC much justice to call it “the Tinder of friendship”. However, it’s origins are strongly linked to the popular dating app.

Co-founder Elva Carri really wanted to go out dancing one Friday night but had no one to go with. All her friends were either busy or tired. Believing there had to be other women in the same position, she put a call out for some platonic dancing buddies on Tinder.

She was inundated with “matches” from girls in the same boat. After adding them all to a Facebook group, Carri realised the need for a safe, online space where women could get to know each other.

What is Girl Crew’s purpose?

As a support network, Girl Crew has flourished. Mulloy recounts one incredible story where a hopeful user shared a photo of her long-lost father, hoping to find out anything she could about him. The community, however, went that extra mile for her:

“We have a group in Dublin where one user shared a photo of her estranged dad with some tenuous details. I remember thinking it was a step too far. But then the comments came in…”

“Someone said it rang a bell and you just noticed a change in the atmosphere. After a few inquiries, we were able to trace who the person was and put them both in touch.”

Making friends in South Africa isn’t a danger-free pursuit for our female citizens. That’s why an app like Girl Crew is perhaps long overdue in Mzansi. If you think this is up your street, you can download the app here and begin making new friendships as and when you please.