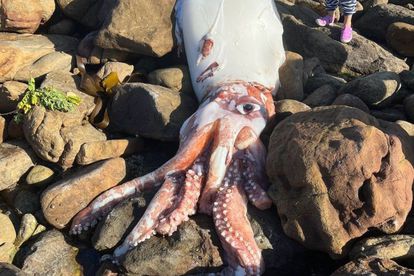 A giant squid washed ashore at Scarborough beach in Cape Town. It was found on Wednesday morning, 16 August.

It is unclear what caused the deep sea animal’s death. Shark Spotters claimed the giant squid’s beak had already been removed by the time its team members arrived at the scene. The beak is used to determine the animal’s age.

According to News24, samples taken from the carcass will be studied by researchers at the Iziko Museum.

It is the second time a giant squid has washed ashore in Cape Town this year. The last beaching occurred at Kommetjie on 30 April, per Live Science.

On that occasion, the stretched carcass measured around 3.5 metres. The giant squid found on Wednesday measured around 4.26 metres, according to a reading from the Department of Forestry, Fisheries and Environment (DFFE)

Giant squids are very elusive animals and typically live at ocean depths between 300 to 1000 metres and can grow up to 13 metres for females and 10 metres for males. The first images of a live animal in its natural habitat were captured in 2004 by a Japanese team.