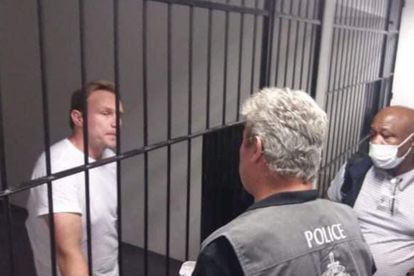 [FILE] Fugitive Gerhardus Jansen van Vuuren, who was returned to SA after fleeing to Brazil, made his first appearance in court on Monday 12 October. Photo: Yusuf Ambramjee

[FILE] Fugitive Gerhardus Jansen van Vuuren, who was returned to SA after fleeing to Brazil, made his first appearance in court on Monday 12 October. Photo: Yusuf Ambramjee

Gerhardus Jansen van Vuuren was convicted for the 2011 murder of his girlfriend, Andrea Venter, on Monday, 13 June. The accused fled the country in 2013. He was re-arrested in Brazil in 2020 and extradited to face the law in South Africa.

He stabbed Andrea Venter multiple times on 2 May 2011, killing her. A security guard at the complex the couple lived in witnessed how Jansen van Vuuren slit his girlfriend’s throat.

The accused was also convicted for the assault of Thulani Ndlovu, the security guard who was on duty at the time of the incident.

Ndlovu told the court how he heard a woman screaming at approximately 6:20 on 2 May and when he stepped out of his guardhouse to investigate he saw Venter running towards him.

As Jansen van Vuuren was chasing Venter, she tripped and fell. Ndlovu saw the accused lift Venter’s head and slit her throat. He then approached the security guard and pointed the knife at him.

“Ndlovu ran back to the guard house where he locked himself up and called for backup. Jansen van Vuuren was supposed to stand trial on 20 May 2013, in the South Gauteng High Court but fled South Africa a few days before the start of the trial in May 2013.

“He was rearrested in June 2020, in Brazil, and extradited to SA to face both charges,” explained the NPA spokesperson.

Jansen van Vuuren’s lawyers put forward a defence of non-pathological criminal incapacity at the time of the offence.

Van Vuuren will be sentenced on 27 July.

TikTok to BAN political funding – what does this mean?