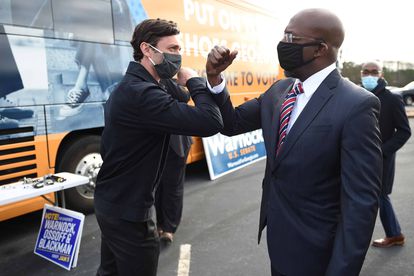 Democrats have taken control of the Senate after securing a pair of historic wins in Georgia’s runoff elections on Wednesday, January 6, 2021.

First to claim a victory was Raphael Warnock, a 51-year-old senior pastor of Ebenezer Baptist Church in Atlanta. Warnock was running against Republican Kelly Loeffler. While Jon Ossoff, a 33-year-old head of a video production company, defeated David Perdue, who had only served a term in the Senate. Perdue and Loeffler are yet to concede.

Both Warnock and Ossoff’s wins are considered a monumental feat for Democrats, with an estimated four million people having turned out to vote in the run-off election. Warnock will be the first Georgia Democrat elected to the Senate in 20 years and the first black Senator in the state. Ossoff now becomes the first Jewish senator in the state and will be the youngest sitting US senator at age 33.

In addition to that, the pair’s win makes them the first Democrats to win Senate seats in Georgia since 2000.

“Everybody who cast your ballot, everybody who put your faith and confidence in our democracy’s capacity to deliver the representation that we deserve — whether you were for me, or against me — I’ll be for you in the U.S. Senate,”

In his victory speech, Warnock paid tribute to his mother, who used to pick cotton in the 50s, as a teenager.

“The 82-year-old hands that used to pick somebody else’s cotton went to the polls and picked her youngest son to be a United States senator,” Warnock said.

Georgia Senate victory: What does this mean for Democrats?

This double win for Democrats now changes the balance of power in the Senate – giving each party 50 seats in the chamber. It would then be up to incoming Vice President Kamala Harris to tip the scales, in the event of a vote.

Essentially being the legislative pulse in Washington, President-Elect Joe Biden, after taking office, would have a far greater chance at moving ahead with policies that Republicans may not be in favour of.

To put things into context – the Senate even has the power to impeach the president, as was the case with outgoing president Donald Trump, who managed to survive the Democrat-sponsored bid to have him removed from office, only because the GOP had more seats in the upper house of Congress.