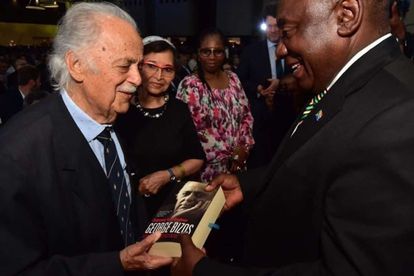 President Cyril Ramaphosa has paid tribute to struggle stalwart George Bizos, saying he always stood for what was right, regardless of the cost.

Ramaphosa spoke at Bizos’ funeral, which was held at the Greek Orthodox Church in Johannesburg on Thursday, 17 September 2020.

“He treated everyone as his equal. From silks to the unemployed young man who had been illegally evicted (from) ministers and presidents to the elderly woman who did not receive her grant. He was on the right side of history,” the president said.

Bizos, a prominent human rights advocate, died at age 92 on Wednesday, 9 September 2020 and was granted an official funeral by the president.

Ramaphosa said the country owed it to Bizos’ legacy to finish what he started and to lay bare the injustices that occurred under apartheid.

“He wore his immense stature in our society with humility and dignity. His one-upmanship was reserved for the courtroom, never for young lawyers. Clients and even senior lawyers lined up at his door seeking advice,” he said.

“For him the struggle did not end with democracy with would only end when every man, every woman and every child in our country enjoys he rights promised to them in our constitution”

The president further said the law needed to continue to be an instrument of protection for the most vulnerable of our citizens.

He has been praised for his dedication to the fight for basic human rights. Bizos represented a number of high-profile activists in political trials including Nelson Mandela, Walter Sisulu and other accused in both the 1956 Treason and 1963 Rivonia trials.

Bizos has also been credited with being one of the architects of the country’s constitution.

Former Deputy Chief Justice Dikgang Moseneke also spoke at the funeral and spoke of how he and Bizos spent six months defending Winnie Madikizela-Mandela over the assault and kidnapping of Stompie Seipei.

“When it was not fashionable, George Bizos chose the side of the powerless, of the tormented, of the oppressed…,” Moseneke said.

Describing him as one of the finest legal minds, Moseneke said Bizos deeply hated unfairness and inequality.