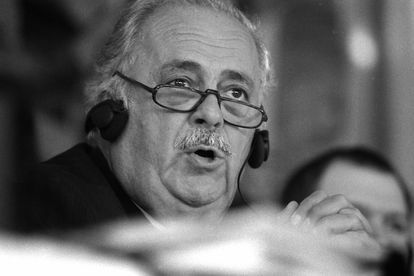 The SAHETI school issued a press release on Wednesday, stating that “our founding Chairman of the Board, past grandparent and long-standing friend of SAHETI”, passed away.

“We are privileged as a school to have benefited from the life of a man who gave his time and energy contributing to the shaping of SAHETI as we know it and enabling us to ‘aim just a little bit higher’.”

Bizos was born in 1927 in Kirani, Greece and arrived in South Africa with his father at the age of 13, as a World War II refugee. Bizos would have celebrated his 93rd birthday in November.

According to the bio on Bizos website, he arrived Durban first and “later moved to Johannesburg where their entry was made simple and smooth by the presence of other Greek community members”.

I remember watching Adv Bizos during the Goniwe Inquest, a stunning performance and a true African#RIPGeorgeBizos #RIPNyamiGoniwe pic.twitter.com/rz3dHgZlw4

Sad news at the passing of George Bizos. A true Patriot, fighting tirelessly and courageously against injustice when many others were afraid to do so. May he Rest In Peace. ??#RIPGeorgeBizos pic.twitter.com/JQEQY6Ddbg

Bizos enrolled for a law degree at the University of Witwatersrand and completed his law degree in 1951. He was counsel to a wide range of well-known citizens, such as Trevor Huddleston of Sophiatown.

Bizos was also part of the legal team that defended Nelson Mandela, Govan Mbeki and Walter Sisulu at the Rivonia Treason Trial from 1963 to 1964.

In 1974. Bizos was one of the original founders of SAHETI and served first as Chairman of the Board for nearly 20 years, followed by the title of Honourary Life Member. SAHETI said in a statement:

“Advocate Bizos was a proud family man, a person of great integrity and courage, and one who encapsulated the dictum by Socrates that, ‘It is not living that matters, but living rightly’.”

Condolences have been pouring in on social media. Herman Mashaba said on Twitter that “we have lost a legend”, and added:

“Deeply saddened to hear of the passing of Human Rights Advocate George Bizos. South Africa owes you a debt of gratitude. May you rest in eternal peace”.

Aki Anastasiou said Bizos was an extraordinary human being and a principled man who stood for what is right. “I’ve known him for most of my life, from the very first day SAHETI School opened in 1974”, he said.

Anastasiou added that “South Africa is emptier without you, Sir”. Professor Thuli Madonsela said Bizos “fought a good fight in pursuit of a Just South Africa that belongs to all who live in it”.

“Sad to see this resolute social justice and integrity crusader go to join Madiba and his other compatriots. Heartfelt Condolences to the family, friends and colleagues.”

Human Rights activist and lawyer, Adv. George Bizos SC has died. He was 92.
Bizos is renowned for representing many political prisoners during apartheid. He was part of a legal team that represented the Rivonia Trialists.
The defence also included, Bram Fischer amongst others. pic.twitter.com/a61y9FRo7E

Around 2004/5, my late grandaunt (Mme Betty Molobi) asked me which career I wanted to pursue. Mentioned a few; Engineering, CA, etc.