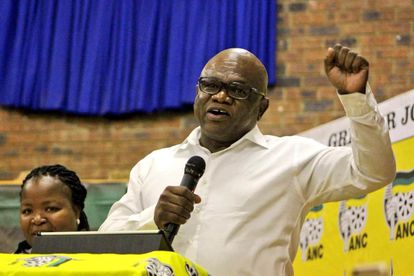 You won’t hear much of him in the news and that is exactly the way he would prefer it. However, recently, Johannesburg’s ANC chairperson, Geoff Makhubo, has been fingered in a tender scam that was blown out of the closet by AmaBhungane.

The investigative journalist firm revealed that it has evidence that shows Makhubo received R30-million from the City of Johannesburg.

The evidence AmaBhungane produced shows that the meticulous Makhubo used his company, Molelwane Consulting, as a front to get his hands on the City of Joburg’s fund pool that was set aside for debt repayments.

What we have been made to believe is that Molelwane provided consultancy services to a company called Regiment Fund Managers, who were tasked by the City of Joburg to oversee the regulation of the billions of rand set aside for debt repayments.

In a space of nine years, from 2009 until 2015, records show that Regiment had already taken R300-million in ‘fees’, 10% of which was paid out to Molelwane Consulting as a fee.

The former mayor of Joburg, Parks Tau has also been implicated in this tender scandal since it all took place under his nose.

Not forgetting that Tau and Makhubo are good friends and how convenient it was in 2011 when Tau became mayor, Makhubo moved on to become the MMC for finance.

This is critical because then it meant that it became Makhubo’s responsibility to oversee the Regiments contract. A sure conflict of interest that was rubbished by Tau, who responded to the inquests made by AmaBhungane.

“I was aware that Regiments and Molelwane had a business relationship. However, I was not privy to their internal business arrangements or transactions.

“On [Makhubo’s] appointment he committed [to unwind] and begun winding down his business interests, which ensured that he was not ‘the player’ and ‘a referee’ on the said contract, or any other contracts in the City.”

The current mayor of Joburg has entered the frey with a charge that he laid against Tau and Makhubo on the basis of the report.

“With the blessing and alleged aide of Cllr Tau – who has admitted on record that he knew of the relationship between Makhubo and Regiments – Cllr Makhubo, who was tasked with exercising political oversight on one of the City’s largest contracts, was allowed to feast off the same set of contracts he had oversight over…

“Further to this, when the tender process in 2011 had excluded Regiments, it was Parks Tau, as the Mayor of the City, who stopped the tender, citing a lack of social responsibility in the requirements of bidders.”

The Joburg ANC office responded to the news of Mashaba’s activities at the police station, calling the mayor out on being a  in a string of tweets.

Makhubo added his bit of defence in and called out those who have predetermined that he was guilty before he got the opportunity to prove his innocence.

“It’s an unfortunate place we find ourselves in South Africa, where one is perceived guilty until proven otherwise in the court of public opinion.

“This is often with dire consequences for those who are tried and convicted in the forum where the normal rules of hearing the other side of the story and interrogating the versions of the accusers — if they are known — is not available to the accused.”