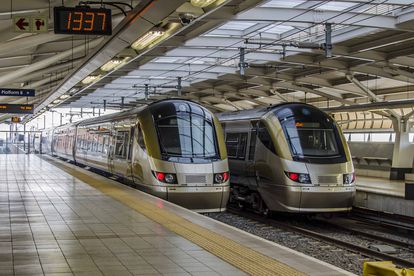 More people will now be able to access the Gautrain.
Photo: Supplied.

More people will now be able to access the Gautrain.
Photo: Supplied.

Gauteng MEC for Public Transport and Roads Infrastructure, Jacob Mamabolo, has determined the route for Phase 1 of the proposed Gauteng Rapid Rail Integrated Network (GRRIN) project which will ensure that more people can access the Gautrain.

This determined route was published on Wednesday, 25 May in the Gauteng Provincial Gazette after the undertaking of the process of determining a route for a provincial railway.

The Gautrain Management Agency said the determination of the route followed a consultative process whereby all stakeholders, as well as interested and affected parties were provided with an opportunity to make submissions in regard to the possible route options.

“After consideration of all submissions received from the stakeholders the final recommended alignment has been identified,” the agency said.

MEC Mamabolo said it is important to note that the route determination is an important milestone in the Province’s rail planning process.

“We are still in the early stages of the process of defining the future rail reserve that will be undertaken with consultation with all interested and affected parties and stakeholders,” he said.

The published route for Phase 1 of the GRRIN Extensions begins at the proposed location of a new station at Little Falls, which is located to the east of Hendrik Potgieter Road in Willowbrook.

From the proposed Little Falls Station, the route runs in a north easterly direction towards Zandspruit where the route will pass to the west of Jackal Creek Golf Estate.

The route then changes in a south easterly direction towards Cosmo City and a newly proposed Cosmo City Station.

From the Cosmo City Station, the route will continue in a south easterly direction towards the newly proposed Randburg Station, passing through North Riding, Olivedale, Bryanston, and Ferndale.

The route will continue in a south easterly direction through Randburg, Bordeaux, and Hurlingham.

Once it has reached Sandhurst the route will change direction towards the existing Sandton Station where an upgraded station is proposed.

From Sandton the route will run in a north easterly direction through Sandton, Sandown, Marlboro, and Alexandra towards the existing Marlboro Station where the existing station will be upgraded to accommodate the new alignment.