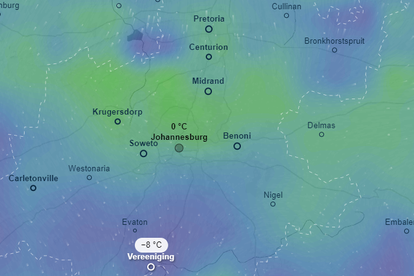 A snapshot of the Gauteng weather forecast for Thursday 16 June, going into Friday 17 June shows just how chilly things will get – Photo: Ventusky

A snapshot of the Gauteng weather forecast for Thursday 16 June, going into Friday 17 June shows just how chilly things will get – Photo: Ventusky

A powerful cold front is expected to land in Gauteng on Wednesday and is expected to result in a drop in temperatures in the province, according to its regional forecaster.

A cold front accompanied by heavy rainfall and strong winds made landfall in the Western Cape on Monday, 13 June and has already resulted in localised flooding in parts of the province.

“Continuous scattered to widespread showers are expected to persist on Tuesday, ceasing to Wednesday.”

As previously reported, forecasts from Gauteng Weather and Ventusky both plot a dramatic decline for thermometers across the province, with the chilly conditions coming into force overnight on Wednesday 15 June.

In the early hours of Thursday 16 June, the biting cold will embed itself in Gauteng, with rural regions worst-affected.

The hours before dawn on Friday 17 June could be the coldest of the lot, however, with several regions on course for a reading of -5°C.

According to the most recent weather map, even the major metros of Johannesburg and Pretoria will experience freezing temperatures. However, it’s the extremes in the south and north-east of the province that are in for the roughest ride.

ALSO READ: ‘It could reach MINUS 5°C’ – Gauteng braces for coldest night of the year!