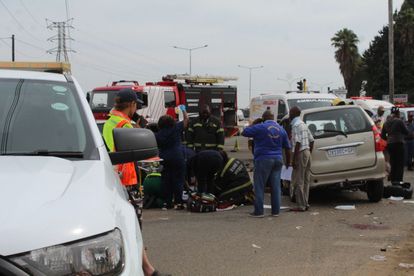 A Gauteng school pupil, 9, died on Thursday when his private scholar transport vehicle got into a collision in the West Rand.

PUPILS GET INTO AN ACCIDENT

According to reports, the pupils are from Dr Yusuf Dadoo Primary School and Ahmed Timol Secondary School, Mabona said.

“Reports also state that a 9-year-old Grade 3 boy learner from Dr Yusuf Dadoo Primary suffered severe injuries as a result of this accident.”

The boy was airlifted to the hospital. But he, unfortunately, succumbed to his injuries and died while receiving medical treatment.

The Education Department has deployed its psychosocial unit to the affected school. The unit is also delegated to the affected families for trauma support and counselling.

Gauteng MEC of Education Matome Chiloane is saddened by the incident. He urged scholar transport drivers to be vigilant on the road when transporting school children.

“We are saddened by this unfortunate incident which claimed the life of one of our learners. We wish to convey our sincerest condolences to the family and the school community. The Department pleads with scholar transport drivers to exercise the utmost vigilance on our roads when transporting our learners,” said Chiloane.

A Grade 11 pupil is to remain in jail for the rest of the academic year as he faces charges of murder.

Amogelang Nkomo, 20, appeared before the Lenasia Magistrates Court on Monday for allegedly stabbing a pupil.

This happened outside Qalabotjha Secondary School in Vlakfontein when a group of boys got into a fight on Thursday 17 November.

According to the police, the deceased learner was stabbed in the upper body with a sharp object. Nkomo was soon arrested after the incident.

The National Prosecuting Authority says Nkomo will return to court on 5 December.