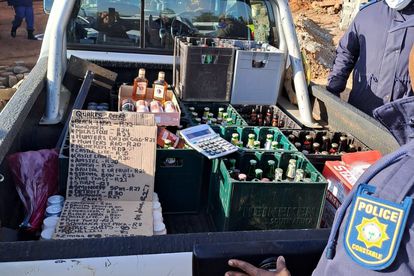 The police in Gauteng closed down several illegal liquor outlets and confiscated their booze. PHOTO: Supplied

The police in Gauteng closed down several illegal liquor outlets and confiscated their booze. PHOTO: Supplied

Eight illegal liquor outlets were closed down in Vosloorus in Ekurhuleni with litres of alcohol being seized. This operation was led by Gauteng Provincial Commissioner Lieutenant Elias Mawela.

ALSO READ: Murder rate increases: Liquor outlets are one of the places you’re most likely to be killed

“One suspect was arrested after he was found with a fraudulent liquor trading licence. 172 other suspects were arrested for various crimes,” said Gauteng police spokesperson Lieutenant Colonel Mavela Masondo.

“Branded local and international items that include sneakers, clothing, watches and handbags were seized. Two suspects were arrested and charged with possession and trading of counterfeit goods.”

An additional 260 suspects were also arrested for serious and violent crimes in the area.

“Members of the South African Police Service within the West Rand District together with other law enforcement agencies conducted Operation O Kae Molao in Magaliesburg, Hekpoort and Tarlton where a total of 110 suspects were arrested for crimes ranging from murder, assault with intent to cause grievous bodily harm, armed robbery, possession of unlicensed firearm and damage to essential infrastructure,” said Masondo.

The police operation extended to Tshwane and Sedibeng Districts, where more than 320 suspects were also arrested for various crimes.

They are all expected to appear before various different magistrate’s courts from Friday, said Masondo.