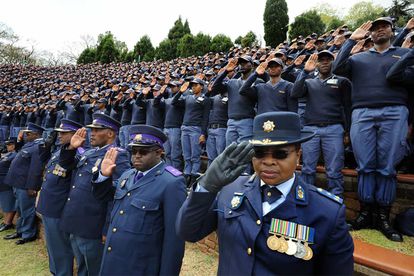 A South African Police Service (SAPS) officer has been shot dead at a funeral in Johannesburg and a police reservist was seriously injured when he was attacked by a mob in Pretoria this weekend, Gauteng police said on Sunday.

SAPS management in Gauteng is saddened on learning of the untimely death of a 40-year-old woman constable stationed at Dobsonville in Soweto, Johannesburg, Captain Mavela Masondo said.

On Saturday, SAPS members had just held the funeral of a fellow officer who had died of natural causes, and were having refreshments after the funeral at the home of the deceased.

“It is alleged that during this time, a member of the public, who was also attending the same funeral, fired shots in the air and the constable was then struck by a bullet in her upper body. She was rushed to hospital and sadly, was declared dead on arrival,” Masondo said.

The man, aged 55, was arrested immediately and his firearm confiscated. He was expected to appear in the Roodepoort Magistrate’s Court on Monday.

Gauteng police commissioner Lt-Gen Elias Mawela extended his sincere condolences to the colleagues and family of the deceased constable. The members and the family would be attended to and offered the required support, Masondo said.

In an unrelated incident, also on Saturday, a police reservist constable who was part of a team carrying out operations at Mamelodi West Hostel Y-Section in Pretoria was rushed to hospital after sustaining injuries during an attack on police by a group of people.

“It is alleged that during the operation at the hostel, police apprehended a suspect in possession of drugs. The suspect was being escorted to the police vehicle when suddenly a group of people attacked the members, in the process freeing the cuffed drug suspect and stealing the member’s personal belongings and loaded service pistol,” Masondo said.

A white Toyota Yaris with unknown registration was seen picking up some of the group members. Police immediately embarked on a tracing operation to retrieve the police handheld radio and firearm and to apprehend the suspects. The firearm was recovered a few hours later abandoned in the hostel. No arrests had been made and the drug suspect was still at large.

Police appealed to law-abiding citizens to come forward with information that could lead to the arrest of both the drug suspect as well as the alleged police attackers, Masondo said.