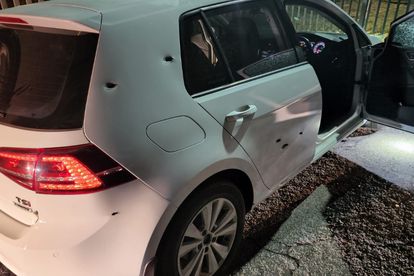 A shootout ensued between the police and the alleged gang members, but they were cornered and arrested. PHOTO: SAPS

A shootout ensued between the police and the alleged gang members, but they were cornered and arrested. PHOTO: SAPS

Members of a gang allegedly involved in violent crimes are caught after fleeing in stolen high-performance cars.

Their arrest comes after a car chase and exchange of gunfire with the police in Kempton Park, police said.

Police from the crime intelligence unit had been following and monitoring a gang. This gang is suspected to be responsible for serious and violent crimes across Gauteng.

But information was received on Thursday that these alleged gang members will be in Ekurhuleni to hijack a car. The police were told that the gang members drove a Lexus, said police spokesperson Lieutenant Colonel Mavela Masondo.

An operational team was immediately activated to intercept and foil the hijacking. It was made up of the South African Police Service (SAPS) Provincial Serious and Violent Crime Unit, the police’s Johannesburg K9 unit, Gauteng Economic Crimes and Essential Infrastructure Crime Intelligence, Cap Security and Fidelity Specialised Services.

“A silver Lexus was spotted travelling together with a white Golf 7, at a high speed in Kempton Park.”

The law enforcement team chased the cars and a shootout between the gang and police ensued.

But the high-performance cars were finally cornered by police. Two suspects, aged 37 and 45 were arrested after they were found with two unlicenced firearms.

“Preliminary investigation revealed that the Lexus was affixed with a false registration plate and that it was reportedly hijacked in Kempton Park in June 2022. The Golf 7 had just been hijacked in the same area,” said Masondo.

The stolen high-performance cars are suspected to be used as getaway vehicles during the commission of crimes such as cash-in-transit heists and business robberies.

“I’m pleased with this collaboration of law enforcement officers. They are always a step ahead of criminals. These suspects will be profiled and firearms taken for ballistic tests, to establish if they are linked to other crimes,” Mawela said.

The two are facing charges of car hijacking, possession of reportedly hijacked vehicles, possession of unlicenced firearms and attempted murder. They are expected to appear before the Kempton Park Magistrate’s Court soon.