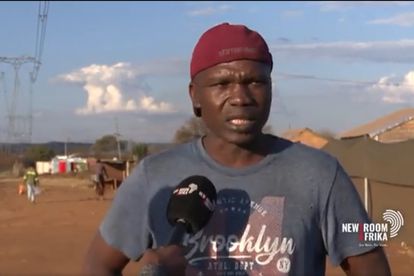 Moshe, a patron who was at the tavern in Ga-Rankuwa, said he witnessed the armed men park outside before shooting at patrons. PHOTO: Screenshot

Moshe, a patron who was at the tavern in Ga-Rankuwa, said he witnessed the armed men park outside before shooting at patrons. PHOTO: Screenshot

A patron who was at the Ga-Rankuwa tavern witnessed the armed men arrive in a car before they opened fire.

Another random shooting at a tavern took place on Friday night, this time in Zone 14 between Ga-Rankuwa and Soshanguve.

PATRON SAW THE CAR PULL UP

Speaking to NewzRoom Afrika, a witness named Moshe, said he was the first to see the armed men arrive.

He was seated outside next to a group of men playing dice at the KO Twin Tavern in Ga-Rankuwa.

Moshe said, what he witnessed was the first time he had seen anything like this since he was born.

“A car came to the tavern. It was four guys who came and opened all the car doors. I was the first to notice them before the guys playing dice saw them. We were seated next to each other,” he said.

Moshe said he immediately fled and ran inside the tavern. He said he could have easily been the first person to be shot at the Ga-Rankuwa tavern.

“They could have shot me first before shooting the guys playing dice. So, since I was the first to notice them, I ran into the tavern and found others inside. We ran into the toilets.”

PATRONS HID IN THE TOILET OF GA-RANKUWA TAVERN

As they were hiding in the toilets, Moshe said the gunmen “got busy” shooting at the men playing dice outside.

“It burnt me a bit as I was fleeing. I went to the hospital and the doctors checked me. They said my lungs are fine. It’s just that my ancestors were with me,” he said.

He said while in hospital, three other men were taken into the ICU.

“I left four others having surgery to get the bullets removed,” he said.

TAVERN WAS ACTUALLY AN ILLEGAL SHEBEEN

The Twin Tavern was actually not licenced and operated as a shebeen. The National Liquor Traders Council says the establishment, where two were shot dead, was an illegal shebeen and not a tavern.

But police are however still on the hunt for the killers.

According to police spokesperson Colonel Dimakatso Sello, the armed gang arrived at 23:00 in a VW Polo. They started shooting randomly at the patrons. Seven of them are wounded and in hospital.

The motive of the killings is not yet known. Those with more information on the killings or the suspects are urged to go to the nearest police station.